The bust of Sir Winston Churchill is the third estate cast made from a life model that was created in the 1950s. The tributes carved on the pedestal are "Statesman, Honorary U.S. Citizen, Defender of Freedom."

Prime Minister of the United Kingdom from 1940 to 1945 and again from 1951 to 1955, Sir Winston Churchill (1874–1965) also held many other important positions during his long career, including First Lord of the Admiralty, Minister of Munitions, and Chancellor of the Exchequer.

He graduated from the Royal Military College at Sandhurst with honors in 1894 and fought in Cuba, India, Egypt and South Africa and in World War I. At the age of 25, Churchill was elected to Parliament, the beginning of his political career in the House of Commons.

For his leadership during World War II, he is widely regarded as one of the greatest wartime leaders of the 20th century.

He is the only British Prime Minister to receive the Nobel Prize in Literature and was the first person to be made an honorary citizen of the United States. In his private life, Sir Winston Churchill was an historian, author of more than 40 books, war correspondent, and painter.

On December 26, 1941, on the eve of the entry of the United States into World War II, Churchill spoke to a Joint Session of Congress. Inscribed on the pedestal is a quotation from that speech: "In days to come, the British and American peoples will, for their own safety and for the good of all, walk together in majesty, in justice and in peace."

The bronze bust is the third estate cast made from a life model that was created in the 1950s; the others are on view in the capital cities of the other World War II allies—at the Museum of the Great Patriotic War in Moscow and the Churchill War Rooms in London. The lost-wax casting of this bust from the original plaster was overseen by Alice Nemon Stuart, the daughter-in-law of the sculptor and manager of his artistic estate.

The bust and its polished Crema Marfil limestone pedestal (50 inches high, 20 inches wide, 16 inches deep) were donated to the U.S. House of Representatives by The Churchill Centre. The tributes carved on the pedestal are "Statesman, Honorary U.S. Citizen, Defender of Freedom." The bust was authorized by House Resolution 497 on December 19, 2011, marking the 70th anniversary of Churchill's speech to Congress. 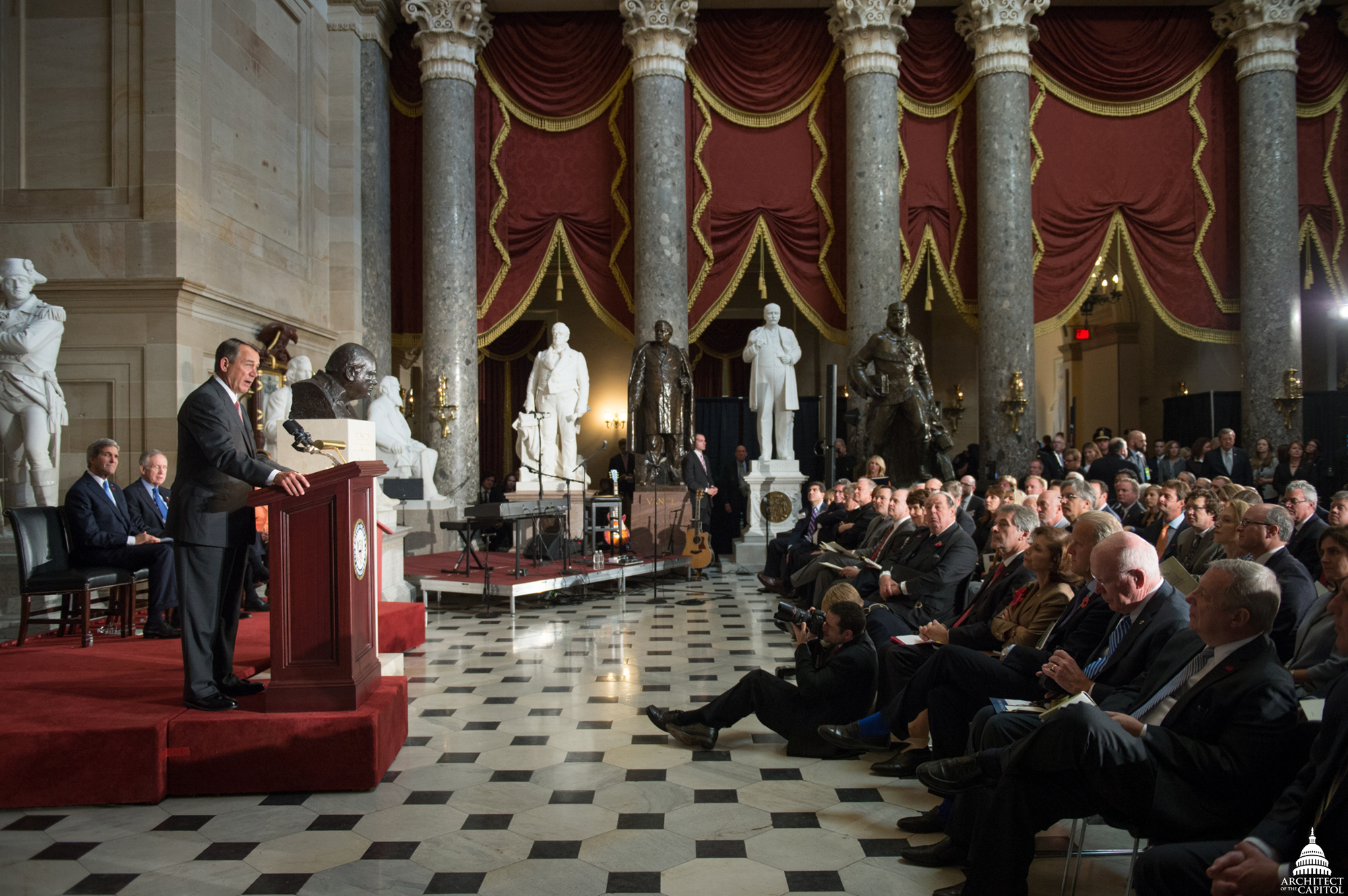 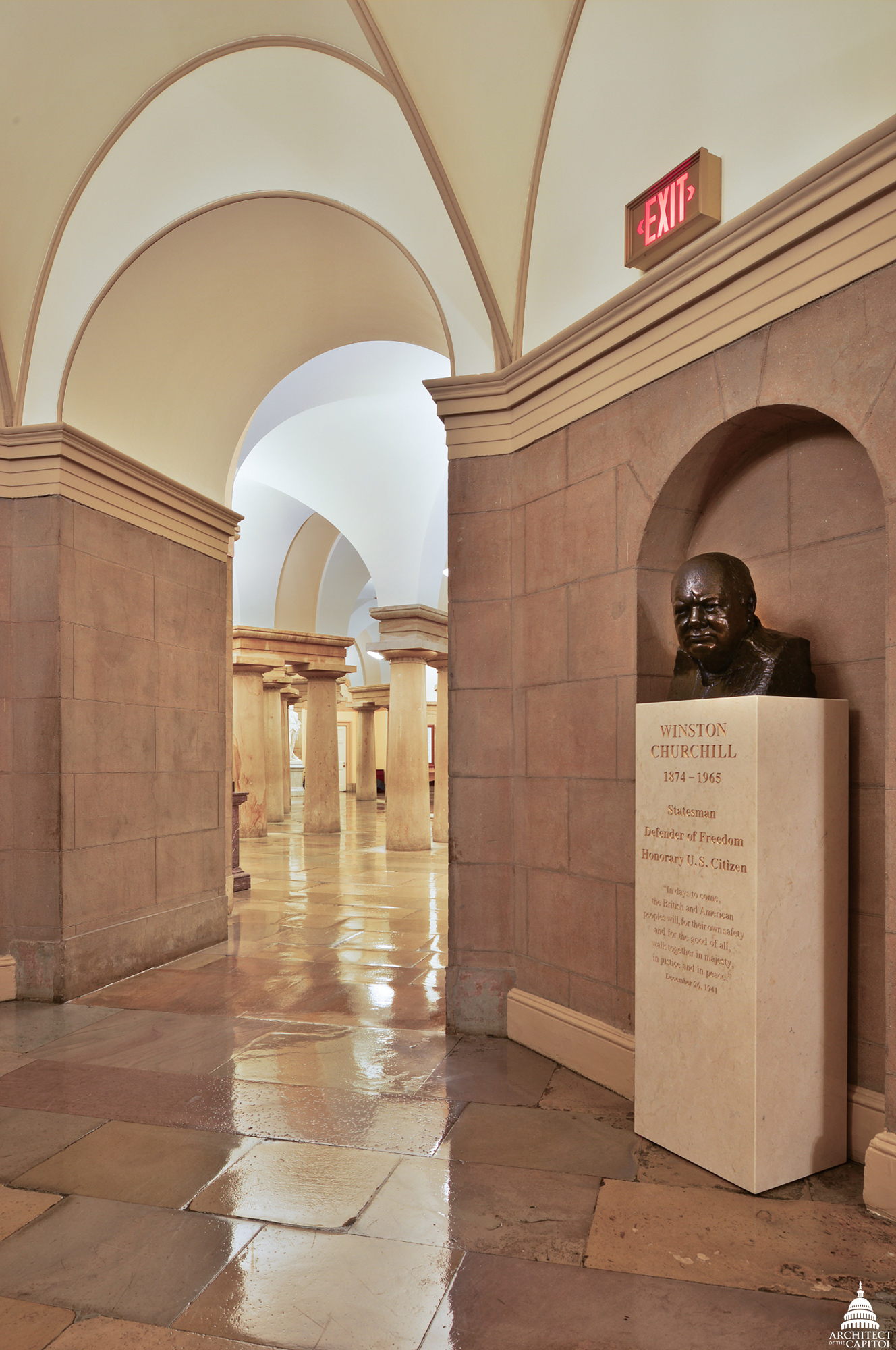 Unveiled during a ceremony in National Statuary Hall on October 30, 2013, the bust is now located in the small House Rotunda on the first floor of the U.S. Capitol.

Sculptor Oscar Nemon (1906–1985) was born Oscar Neumann in Osijek, Croatia. He displayed a talent for art at an early age. After receiving his baccalaureate, he moved to Vienna and worked in his uncle's bronze foundry. He studied briefly in Paris and moved to Brussels in 1925. Seeing the expansion of Nazi Germany, Nemon escaped in 1938 to England, which became his home for the rest of his life.

Nemon was a prolific sculptor, most often working in clay directly from life. The majority of his sculptures were cast in bronze. His most frequent subject (in more than 50 works) was his close friend Sir Winston Churchill. Nemon also sculpted portraits of Queen Elizabeth II and Presidents Harry S. Truman and Dwight D. Eisenhower.