A Woman's Perspective: Turning Challenges into Opportunities and Personal Growth

In Bloom: Jeepers creepers, it must be spring!

The flowering season in our National Garden's Mid-Atlantic native plant collection at the U.S. Botanic Garden begins each year at ground level. Starting in March and lasting into April, bright patches of low-growing phlox punctuate a landscape whose other residents are just beginning to raise their groggy heads to the warming sun of springtime.

While most people would refer to these vibrant bloomers as "creeping phlox," they are actually represented in our garden by two different, but similar-looking, species: moss phlox, or creeping phlox (Phlox subulata, above) and trailing, or pine phlox (Phlox nivalis, right). Both species are found in shades of pink or lavender, but pure white forms are available, many with a contrasting "eye" for extra punch.Phlox subulata shows more color range, and selected forms and hybrids can be had in lilac blue, rose and garnet red. This is the phlox formerly sold by the side of the road in cardboard flats, each a sheet of brilliant color to entice you to pick one for your home landscape. 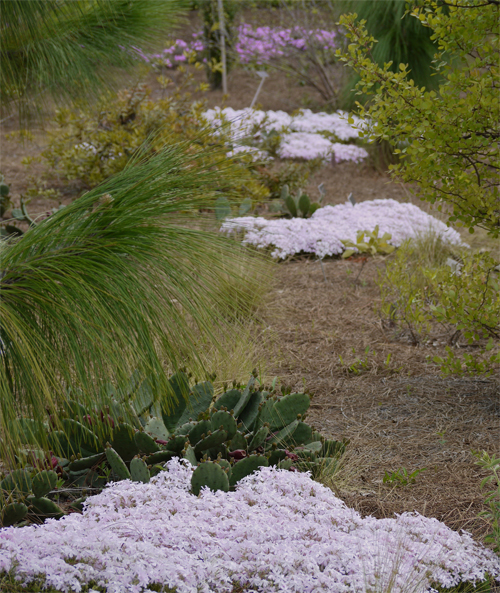 Phlox nivalis is available through mail-order specialty firms, and is a bit slower to cover ground, usually making it a perfect rock garden plant. Its colors tend to be more pastel, often a candy pink or near white. Named varieties are available in bright magenta and lavender shades, if that is what it takes to jolt you from your post-winter blahs!

While both of these plants are hardy in the D.C. area, Phlox subulata is the species of choice far North and West of the city, or if you are looking for a quicker growing groundcover. Phlox nivalis is likely to be a bit more heat tolerant, and ideal for smaller spaces where it will take a little more time for its low mounds of foliage to advance.

Whatever you choose (we chose both!) just give them an open, sunny spot with excellent drainage. While drought tolerant, a little water during periods of extreme dryness will keep them looking their best, and a shearing right after flowering, followed by a light feeding will keep both of these creeping charmers tidy and vigorous. To see these plants, or for other ideas for your garden, visit the Mid-Atlandtic native plant collection in the National Garden at the U.S. Botanic Garden.

To learn more about the U.S. Botanic Garden visit www.usbg.gov.