This year, the Capitol Power Plant marks 100 years of steady service of steam and chilled water to heat and cool the Capitol. In that century of service, the plant has undergone significant changes as new buildings were built, and more modern and efficient equipment was installed.

What hasn't changed over the years is the commitment of the staff to ensure that the Capitol Power Plant continues to provide these necessary services.

The need for a central heating and electric plant became apparent in the beginning of the 20th century when planning began for the first House Office Building (Cannon). Superintendent of the Capitol Elliot Woods made plans to construct a new power plant that would be connected to the Cannon Building to serve it, the U.S. Capitol, and the Library of Congress. Prior to the central plant’s construction, the U.S. Capitol and other buildings each had its own "power plant," but it was determined that a central power plant would be much more efficient in meeting the increasing demands as more new buildings were being planned and built. Congress authorized its construction with the passage of the Act of April 28, 1904. 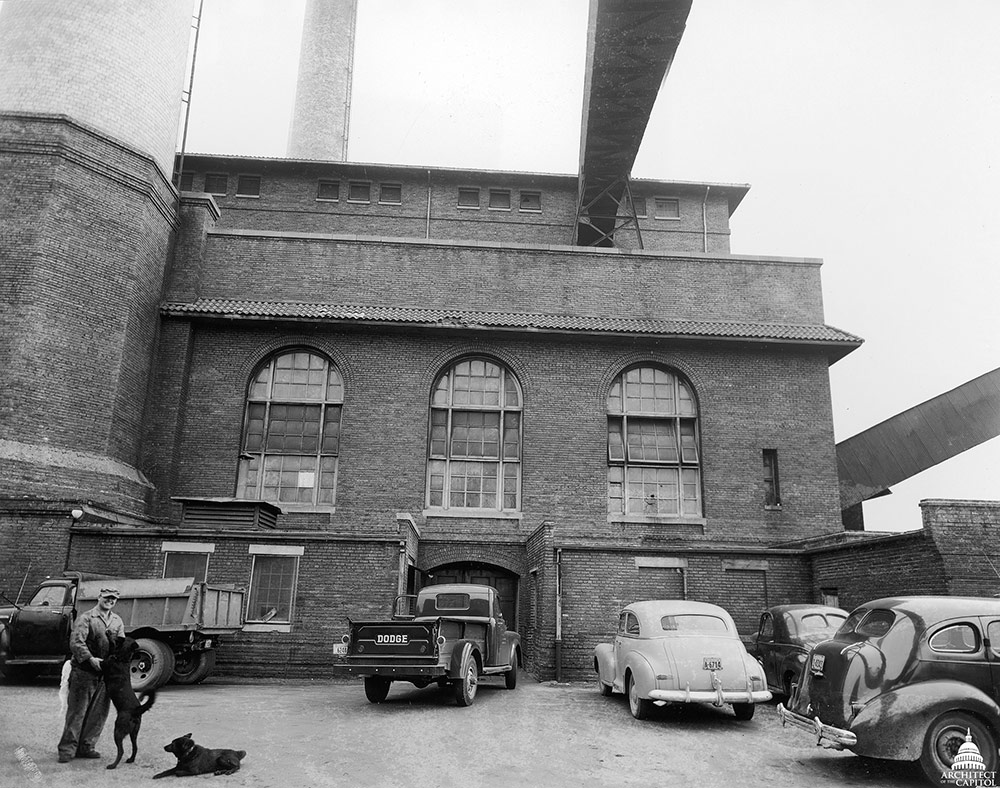 A historic view of the Capitol Power Plant.

The plant was sited, according to Bill Allen, Architect of the Capitol (AOC) historic preservation officer, on public land that was near the railroad tracks so deliveries could be easily made, and close to the Anacostia River from which water was pumped to produce steam for heat.

"Woods was scientifically inclined, so his interest in building a central power plant — which was a new and popular concept — featuring the latest and greatest technology was not out of character for him," noted Allen. "What Woods didn't know at the time was that, although the plant was state-of-the-art for its time, he underestimated the future needs of the Capitol and that the plant would need to evolve to meet growing demands." 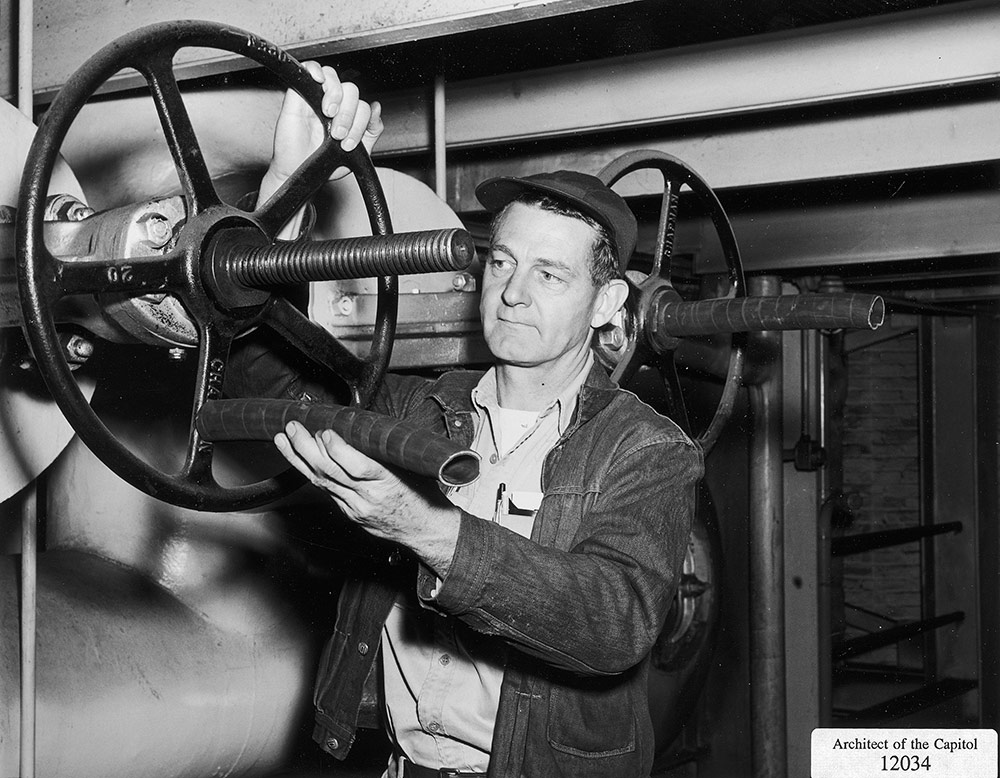 A worker inspects a valve in the Capitol Power Plantt.

In the 1930s, air conditioning was quickly becoming an indispensable part of life on Capitol Hill. In 1935, Congress appropriated funds for the installation of central refrigeration equipment to circulate chilled water throughout the various buildings, thereby providing central air conditioning and allowing Congress to work during the hottest months of the Washington, D.C. summers. Its integration into the plant made it the first large-scale refrigeration plant in the world.

By the 1950s, the plant stopped generating electricity, but the addition of the Rayburn House Office Building, the House and Senate subway systems, the U.S. Capitol's East Front extension, and several other new projects in the late 1950s, 1960s and 1970s, necessitated several major upgrades to the plant’s equipment and infrastructure, including the addition of the West Refrigeration Plant and the administration building.

By 2008, the AOC had expanded the West Refrigeration Plant to reliably meet the future cooling requirements of the Capitol. This was necessary to meet the increased load of the Capitol Visitor Center (CVC) and other building additions, renovations and modernizations. The expansion also increased the plant's overall efficiency. 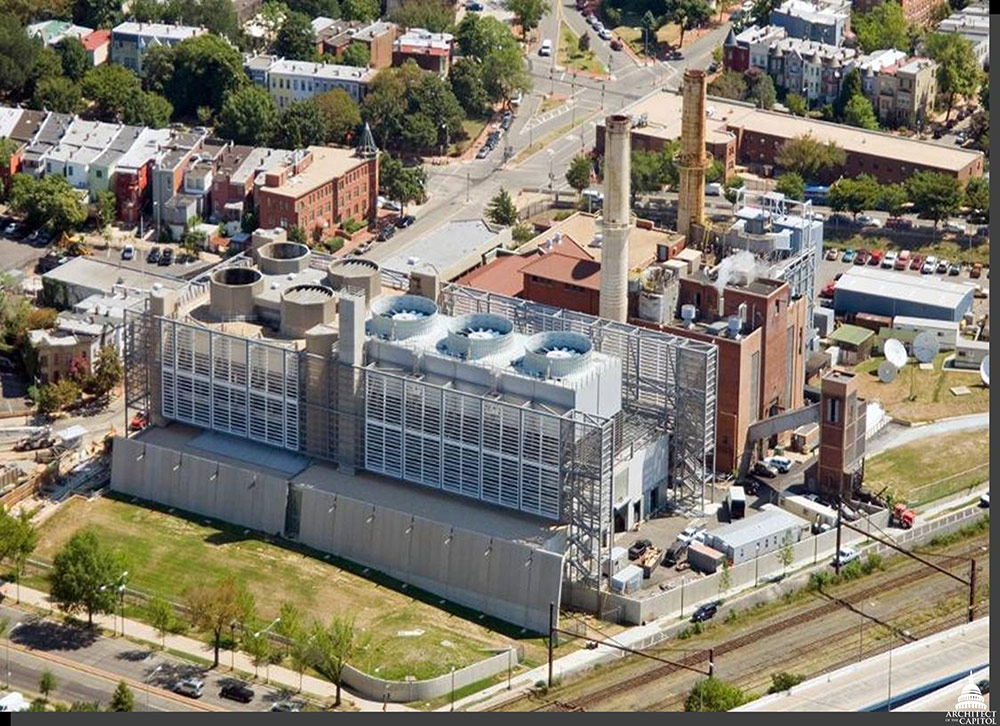 Even at age 100, the Capitol Power Plant continues to serve the Capitol, expanding and modernizing to meet current needs.

Because the Capitol Power Plant plays a critical role in the Architect of the Capitol's long-term energy conservation and sustainability strategy, we are continually working to improve and upgrade operations there.

This new and sophisticated equipment requires a well-trained and expert staff to ensure it operates effectively and efficiently year-round. The plant's staff are highly-skilled and extremely dedicated — many have worked at the plant for decades. 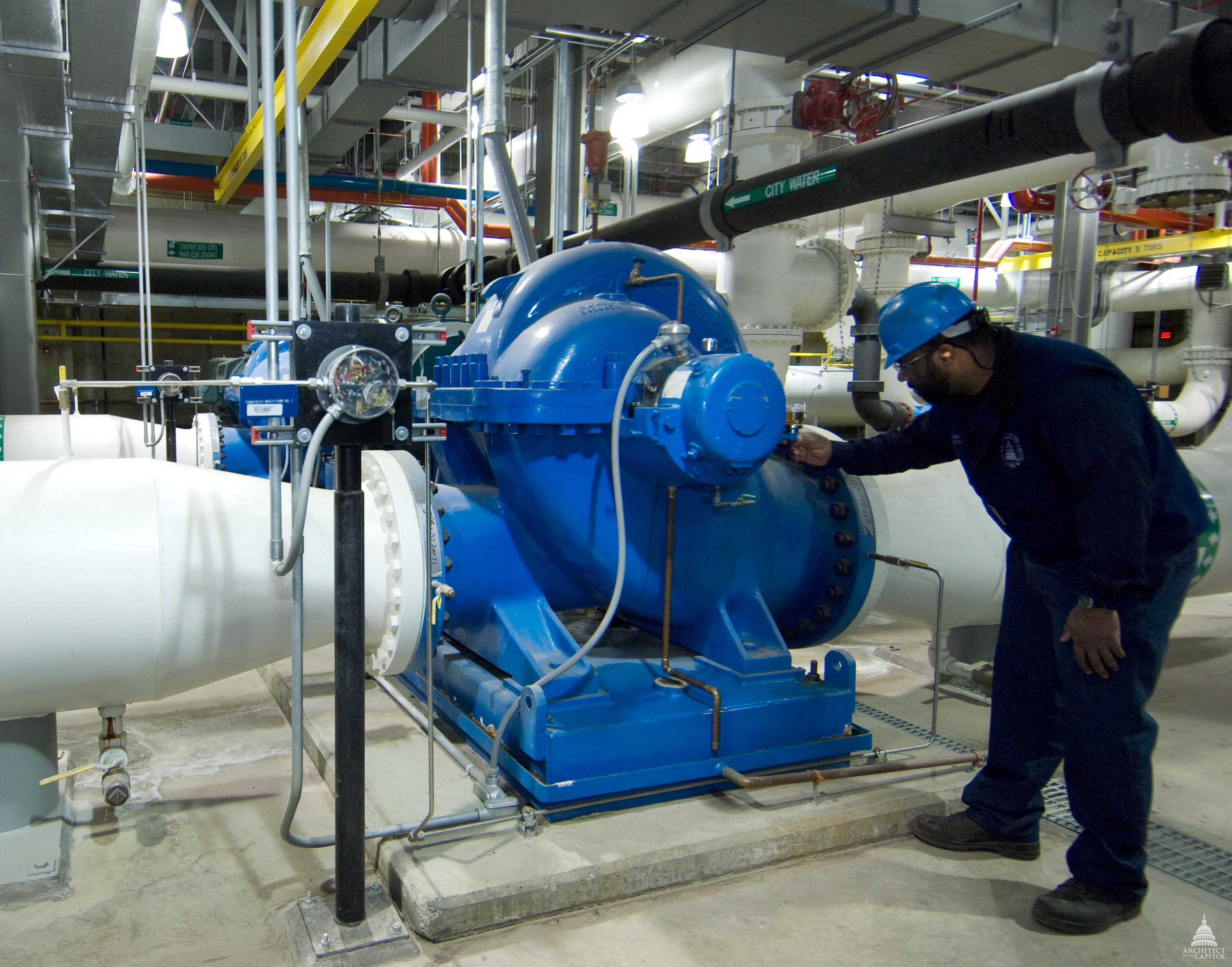 An AOC Capitol Power Plant employee inspects the equipment to ensure it is reliable every day of the year.

Roger Grooms (now retired) worked at the plant for 41 years, joining the staff in the 1950s. "Years ago we did most of our work by hand. To clean some equipment, a co-worker lowered you down on a rope. You'd clean the equipment and then they'd pull you back up."

Barry "Toby" Virts, general foreman and a 28-year veteran at the plant added, "When the box cars rolled up on the railroad tracks with bulk deliveries, we all had to grab hand carts and unload the cars by the cartful. When I started in operations, there was no central control room. There was one desk in the middle of the room. You could literally hear the difference when you made an adjustment to the boilers; feel the heat. It took finesse to operate the boilers."

"You could hear the machines and were sensitive to any changes in the boiler room," added Roland Wright, operations supervisor, who has been at the plant for 24 years and with the AOC for 34 years. "Everything was hands on. You knew exactly where to go to make adjustments." 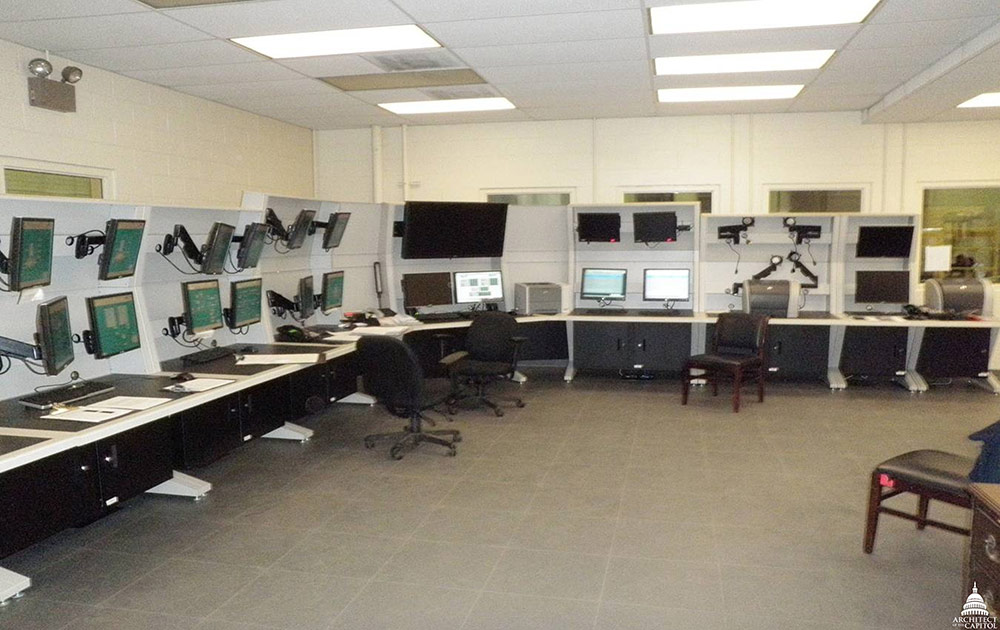 Today, the Capitol Power Plant is monitored and controlled via a centralized room ensuring maximize efficiency.

So, when the plant went fully digital in 2008, these hands-on professionals had to make some adjustments of their own.

"We had to learn to trust the instruments," noted Virts.

"And, we still make the rounds," added Wright. "We can still hear the finest steam leak by getting to know the plant and equipment, but with the digital controls, we've developed a new set of skills to run the plant."

When asked what it is about the plant that keeps them on the job so long, they all had the same reply: teamwork.

"The plant is my other family," said Wright. "We spend lots of time together and it's a privilege to work here and to serve Congress."

"My family was so proud of me and what I was doing," added Grooms, "that they always understood when I had to work late."

Evans said he's honored to carry on the family tradition. "Some of the guys that are still here have known me since I was three-feet high. I used to tell my grandfather about all of the changes — the new digital controls, the expansion of the West Refrigeration Plant — huge improvements, but the family atmosphere remains."

Looking forward to the next 100 years, it goes without saying the plant will be experiencing more changes. Among those changes is a plan to co-generate electricity along with steam — which will, in some respects, return the plant to its roots.

Jim Burch, Assistant General Foreman, says the plant is ready for change. "We're already moving forward with the upgraded digital control systems and other modern equipment in our operations. With newer technologies and more efficiency, we'll be getting a greater return on Congress' investment here."

"When new employees come on board they always say, 'We work for Congress? That's so cool!'" said Burch.