One of the greatest privileges of working for the Architect of the Capitol is knowing we have our hands on history everyday and we are afforded the opportunity to walk in the footsteps of the giants of America's past. Perhaps no other person looms larger in that history than Abraham Lincoln.

The attention for the movie "Lincoln" produced by Steven Spielberg and starring Daniel Day-Lewis as President Abraham Lincoln drew focus once again on this remarkable individual, the period in which he lived and led, and his connections to the U.S. Capitol. Today, one cannot walk far in the Capitol Building without seeing a likeness or other connection to America's 16th president and the tumultuous period he served in Congress and the White House. 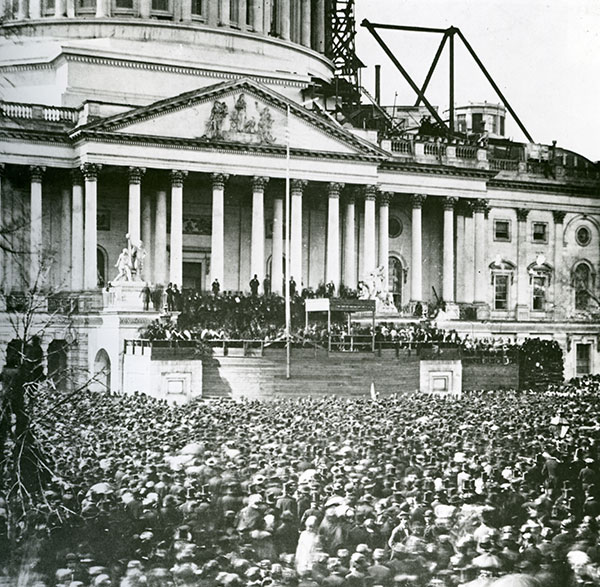 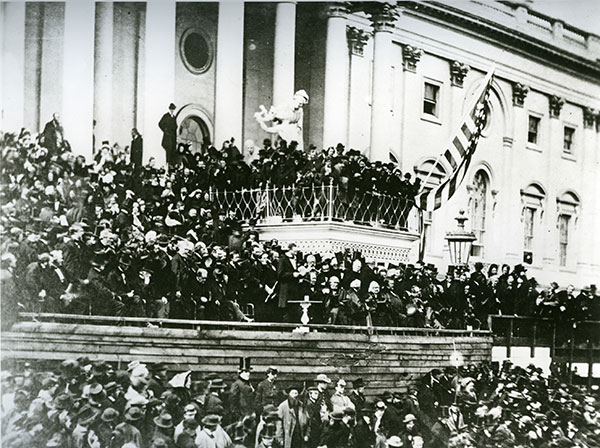 A good place to begin walking in the footsteps of Mr. Lincoln is outside on the East Front of the Capitol in the shadow of the Capitol Dome. It was here in 1847 that he arrived as a newly elected Congressman of the Whig party representing Illinois. The Capitol he viewed that year would appear much different later upon his return to the East Front in 1861 and 1865, to be inaugurated President of the United States.

In 1847 the Capitol was much smaller than it appears today and the "Bulfinch Dome" that was atop the building was much lower than today. One remarkable feature of the Dome in 1847 was the sight of Crutchett's Lantern. Rising 92 feet on a mast over the Dome, the 20 feet by 6 feet glass and gilded iron lantern included reflectors that threw light into the Rotunda at night and could be seen miles away. James Crutchett built the light at his own expense (an advertisement for his gas business). Each night a workman had to climb an eight-inch wide ladder to the top and light it. After safety and cost concerns for operating the light grew, work began to remove it after less than a year in place. 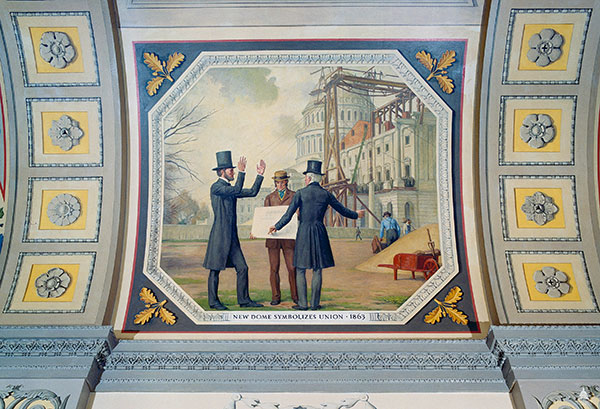 Over the next 14 years the appearance of the Capitol drastically changed. During the 1850s the Capitol was extended, adding the current House and Senate Chambers. Then in 1861, when Lincoln returned for his first inauguration, a new Capitol Dome was under construction. Four years later, Lincoln's second inauguration took place in front of the newly completed Capitol Dome with the Statue of Freedom atop it. The engineer in charge of this expansion of the Capitol, Montgomery Meigs, would also play a key role in the Civil War as Lincoln's Quartermaster General. 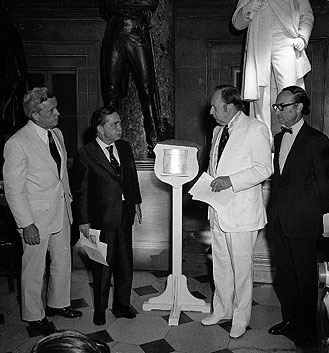 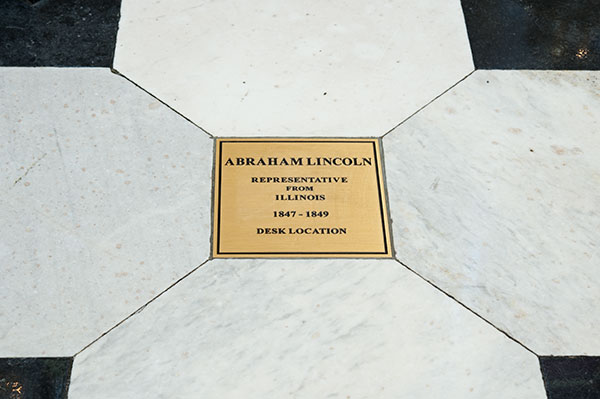 Inside the Capitol, it is not difficult to envision what the building was like during his time. Today in National Statuary Hall (known as the Hall of the House in Lincoln's time) a plaque on the floor marks the approximate location of the desk he sat at during his one term in Congress. Here he served among many well-known contemporaries including John Quincy Adams, who in 1848, would collapse on the floor of the House and die two days later. Lincoln would serve as an honorary pallbearer at his funeral. 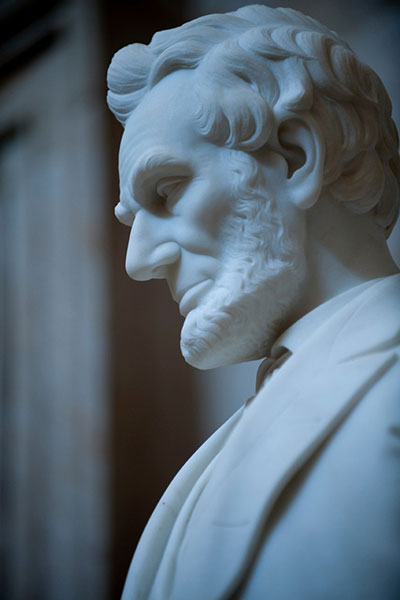 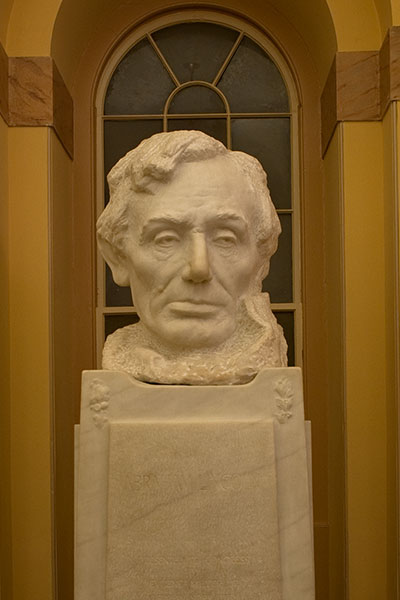 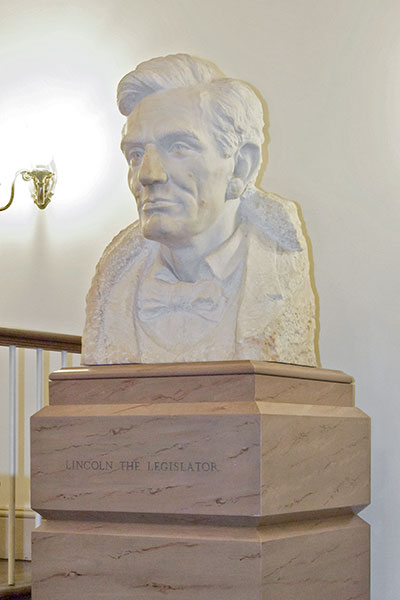 Statue and busts of Lincoln on display in the U.S. Capitol.

Moving from Statuary Hall into the Rotunda of the Capitol stands a statue of President Abraham Lincoln, holding the Emancipation Proclamation, as depicted by Vinnie Ream. Selected by the Congress in 1866 to create the marble state of the Lincoln, she was the first woman to receive a government commission for art.

Walking down from the Rotunda to the Crypt of the Capitol, Lincoln appears again, this time as a large bust, by Gutzon Borglum made in 1908. A mold of the bust was later made and bronze casts of the bust are in the collections of the White House, the Chicago Historical Society, the College of the City of New York, the Tomb of Lincoln in Springfield, Illinois, and the University of California, Berkeley.

Not far from Borglum's bust, is another colossal depiction of Mr. Lincoln. The bust "Abraham Lincoln the Legislator," by Avard Fairbanks was made in 1985, and now rests at the foot of the stairs in the Small House Rotunda. These are the same stairs that Lincoln would have climbed to arrive at the Hall of the House during his term as congressman.

To conclude our walk through Lincoln’s life at the Capitol it is best to end with a stop in Exhibition Hall at the Capitol Visitor Center. On display is the table from Lincoln's second inauguration, from which on March 4, 1865, he delivered the words:

"With malice toward none, with charity for all, with firmness in the right as God gives us to see the right, let us strive on to finish the work we are in, to bind up the nation's wounds, to care for him who shall have borne the battle and for his widow and his orphan, to do all which may achieve and cherish a just and lasting peace among ourselves and with all nations." 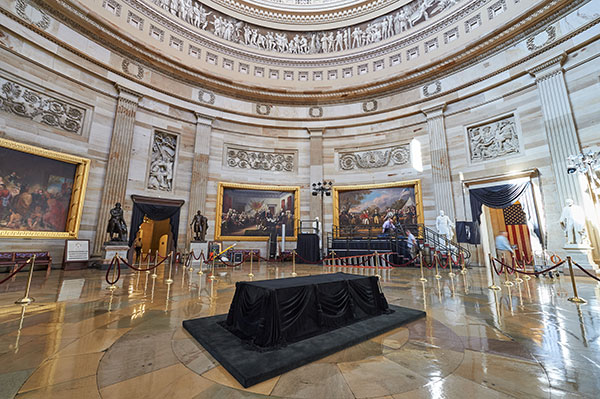 The Lincoln catafalque seen in the U.S. Capitol Rotunda.

While Spielberg and Day-Lewis may have brought "Lincoln" to life, it is humbling and inspiring for me to work everyday among the places where he actually lived and died, and know the hard work of AOC employees is helping preserve it for future generations.

Don't forget the painting on the staircase right off the Senate Chamber, "First Reading of the Emancipation Proclamation by President Lincoln," by Francis Bicknell. http://www.senate.gov/artandhistory/art/artifact/Painting_33_00005.htm