One of the main goals of the Cannon Renewal project is to preserve as much of the Cannon House Office Building's historic material as possible, allowing future generations the opportunity to experience and marvel at what was created at the turn of the 20th century. When stone, wood and glass are conserved using well-honed techniques and by following preservation best practices, a sense of the era in which a building was constructed is immediately apparent.

At the same time, functionality is key. The Cannon Building is a working office building for members of the U.S. House of Representatives. The Architect of the Capitol's (AOC) challenge is to balance the current needs of hundreds of House members, staff personnel and visitors with its long-term mission to preserve the buildings on Capitol Hill for the next century and beyond. The renewal of the Cannon Building is a prime example of how the AOC is able to balance and meet these needs. 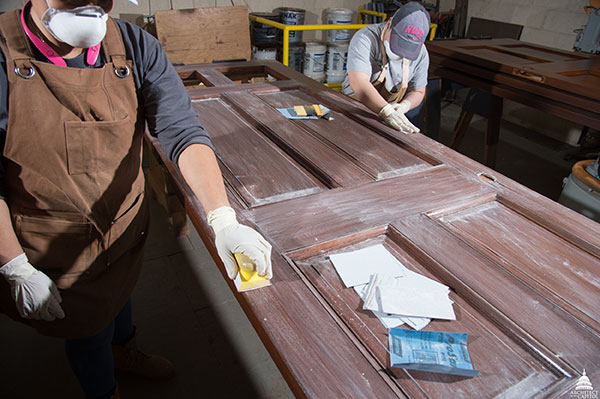 The preservation of the Cannon Building's historic windows and doors allows the building to retain much of its original character and charm, while increasing the building's functionality for those who work and visit within its walls. More than a century of use had taken a toll and many of the doors were warped and pockmarked with nicks and scratches. Some of the windows had been repainted so many times that they no longer opened, and the original bronze-plated chains were caked with paint.

At the beginning of Phase 1 of the Cannon Renewal, workers carefully removed the windows and doors and transported them to a local company's shop for restoration.

Watch the restoration process in the video above.

The pine windows, built in the early 1900s from old-growth forest wood, required extensive preservation work. The first step was to place the entire window sash in a steamer to loosen the dozens of layers of paint that had accumulated during the previous century. Then the glass was removed and the sash was re-steamed again to further loosen the paint. Workers then scraped the paint away, revealing the pine wood beneath. 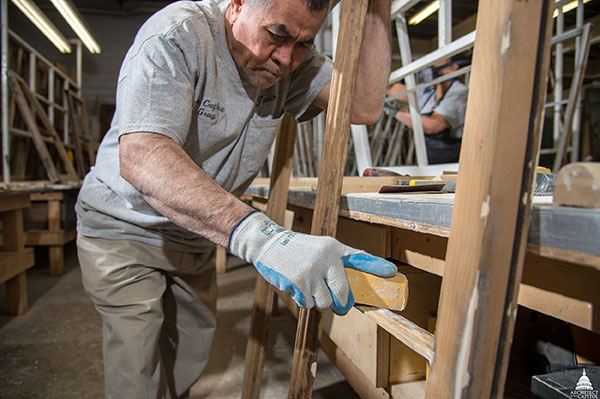 After carefully scrutinizing the individual sash's condition, workers re-glued and placed epoxy in any unstable joints, then inserted new pieces of wood where necessary (known as a Dutchman). After letting the glue and epoxy dry, the entire sash was sanded, primed and painted. The final two steps were to re-install the glass and apply the final coat of finish paint. Although the process is done by hand and therefore quite labor-intensive, the end result is a beautifully functioning window.

The original mahogany doors underwent a similar labor-intensive process. First, a chemical stripper was used to reveal the original wood grain beneath the layers of accumulated varnish and stain. After workers evaluated the condition of the door, they set epoxy or made any necessary Dutchman fixes, then injected glue to re-adhere the panel veneers. The entire door was then sanded, stained and a thin layer of polyurethane was applied. 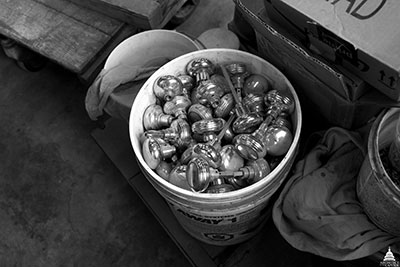 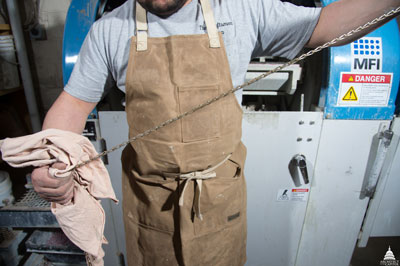 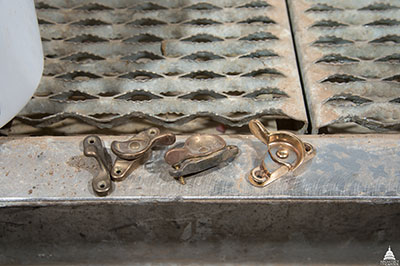 Door and window hardware for restoration.

The collected door and window hardware — including knobs, chains, hinges and sash locks — was run through a unique machine that used friction to remove any layers of paint or varnish that had made functionality difficult.

While all of this off-site work was underway, workers on-site applied a chemical stripper to the frames of the windows and doors to remove the layers of paint and reveal the pine wood that lay beneath. After undergoing the same kind of repairs as the off-site windows and doors — including adhering epoxy and Dutchman fixes — the frames were sanded, primed and painted. 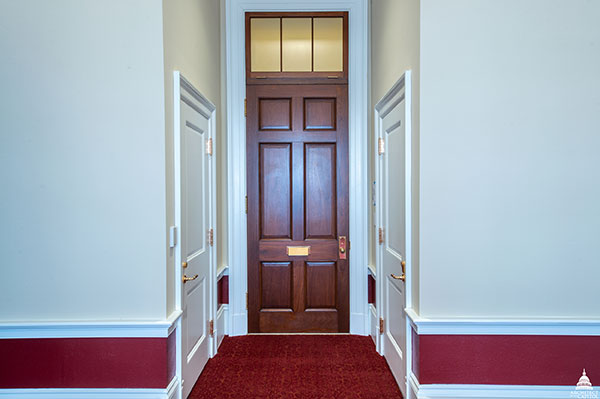 Starting early summer 2018, the windows and doors were returned to the construction site, and workers reinstalled the finished products in their original locations. The restored hardware was reattached and the completed doors and windows do exactly what they were designed to do: open.

Learn more about the current and future phases of the Cannon Renewal at aoc.gov/cannon.

Wow - amazing restoration work - by the AOC - so glad these historical windows and doors can be used for at least another 100 years.
Again Thank You for all the sites you share with us, so many photos are never seen when we visit. At 82 years getting around is difficult, these "tours" then are a blessing.
Thank you for this inside glimpse at such intricate work that is taking place daily through the efforts of skilled AOC craftsman. Would not have known the many layers in this restoration process.