A Most Magnificent Ruin: The Burning of the Capitol during the War of 1812

Numerous iconic moments emerged in the aftermath of the assassination of President John F. Kennedy: Jackie Kennedy refusing to take off the blood-stained dress following the murder; the toddler of the 35th president saluting his father’s casket; or young Caroline kneeling in the Rotunda and touching the flag-draped remains. The most persistent memory for many Americans was the energetic and riderless horse who pranced through the streets of Washington, D.C., behind the caisson.

The horse was Blackjack, a Morgan and American Quarter mixed-breed horse. Born in January of 1947, Blackjack entered the Third United States Infantry Stables at Fort Myer on November 22, 1953. The spirited horse was deemed too difficult to ride and began service as a caparisoned (riderless) horse for funerals at Arlington National Cemetery. During his tenure, Blackjack took part in the funerals of Presidents Herbert Hoover, John F. Kennedy and Lyndon B. Johnson as well as General of the Army Douglas MacArthur. 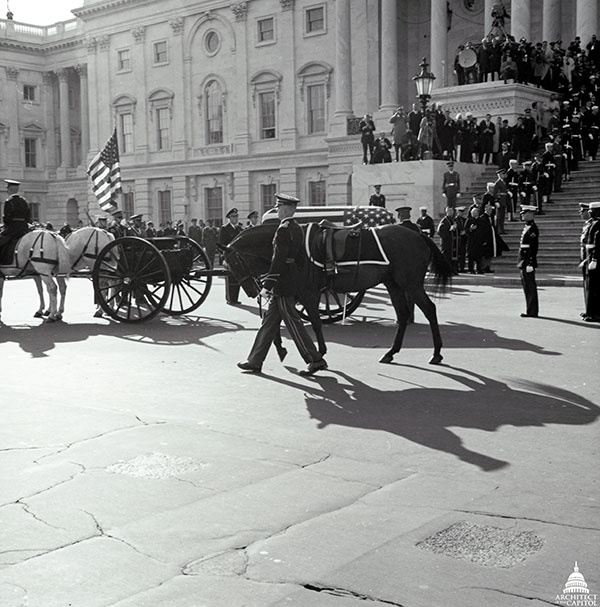 Blackjack on the East Front Plaza of the U.S. Capitol Building next to the casket of President John F. Kennedy.

His participation in President John F. Kennedy's funeral made him a household name. The feisty horse struck a nerve. He danced and pawed at the ground wearing a cavalry saddle, sword and backward boots in the stirrups, symbolizing the end of Kennedy's tenure. His energy seemed to embody the national feeling that the young president from Massachusetts was taken too soon and had more to give.

In the years that followed, Blackjack was memorialized in a variety of ways. The saddle, stirrups, sword and boots used in the funeral are in the John F. Kennedy Presidential Library and Museum. Statues, books and even a Facebook account exist for feisty Blackjack. During a recent renovation at the U.S. Capitol Building, members of the Architect of the Capitol uncovered a long-forgotten painting of the famous horse. Today the room houses functions of the House Clerk, but it previously housed the Capitol Building Paint Shop and later part of the Flag Office. 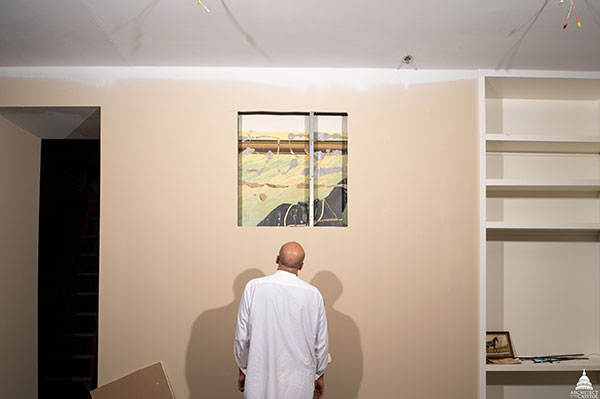 AOC painter Roberto Duglio examines the Blackjack painting to prepare for its restoration.

The former supervisor of the paint shop, Joe Sarafin, regularly used the space as a studio to hone his craft. "Joe would use the walls of the shop to practice different techniques, color schemes and paint products. He was extremely talented," said Kevin Grooms, manager of the painting section.

Karen Livingston, former Flag Office supervisor, confirmed Blackjack's popularity on the Capitol campus. When she joined the office more than 20 years ago, her desk was directly beneath the painting. "Congressional staff regularly brought groups of constituents to our office to see the painting of Blackjack and the painting of the Thomas Jefferson Memorial located on the opposite wall." 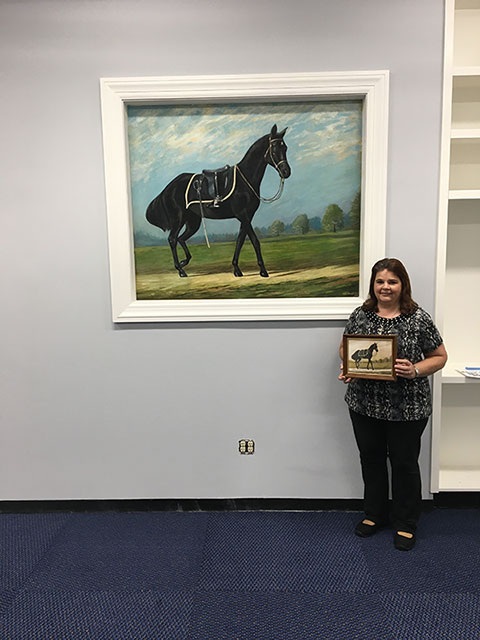 Former AOC employee Karen Livingston poses with the Blackjack painting while holding the painting it was based on.

Dwayne Thomas, facilities operations specialist, and Kristy Long, deputy superintendent of the Capitol Building, worked with their team to frame out the paintings rather than recover the space with drywall after the discovery. "It would be a shame to cover over the paintings again. It is a piece of history and a fantastic celebration of AOC talent. I'm so happy we found it," said Long.

This is a great article, but I wish it would have mentioned the fact that Roberto Duglio restored the painting. It was in bad shape when uncovered and could not have been left uncovered without restoration. Roberto is a very talented decorative painter and artist. In the article, it just has him captioned as an unnamed “AOC painter”.
Thanks for your comment, Cori! We would definitely like to recognize Roberto. The photo caption has been updated.
WHAT A DESCOVERY! Thank you for all your effort to restore.
The pics of the exposed Jefferson Memorial painting that were posted to Instagram were pretty cool, too!