One of the lead characters in the "Monuments Men" movie was inspired by Walker K. Hancock, an artist who contributed many works of art to the U.S. Capitol, Library of Congress and the Supreme Court of the United States. Dig deeper in to this monument man's history.

Not every fine art sculptor inspires a character in a WWII action blockbuster starring George Clooney, but not every sculptor is Walker K. Hancock, one of the Monuments Men, whose work resides in the U.S. Capitol, Library of Congress and the Supreme Court of the United States, and who is a true American hero.

Walker Hancock and Gerald Ford talk in front of his Vice President bust.

He was courageous enough to race through a barely liberated Europe to rescue the prize artifacts of western civilization from Nazis, clever enough to find a creative solution to placing an eight-ton statue and skilled enough to be selected repeatedly to memorialize Vice Presidents, Chief Justices and founding fathers.

He also sculpted the busts of Chief Justices Earl Warren and Warren E. Burger at the Supreme Court and crafted the monumental statue of James Madison in the lobby of the Library of Congress James Madison Memorial Building.

Hancock went to great lengths to ensure his figure of Madison (pictured above is Hancock with a model of this statue) represented his subject's character, reading volumes on his subject, known as the father of the U.S. Constitution, who collaborated with Thomas Jefferson on foundational documents of our democracy. Hancock found that Madison was "largely responsible for the Constitution and responsible too for the practicability of many of Jefferson’s ideas which to Jefferson came simply as flashes of inspiration, but needed the discipline and intellect of Madison to bring to reality."

The expression of that intellect led to a key insight for Hancock's composition of the statue. "When [Madison] spoke he demolished his opponents' arguments, and I wanted to have him sitting there with his book in hand — because after all this is the Library of Congress—listening intently, and ready to leap up at any moment and take over, when he spotted a weakness that needed to be dealt with."

That sense of impending motion was developed in a series of ever-larger models that Hancock created — the original and smallest of which resides in the office of the current Architect of the Capitol to this day. 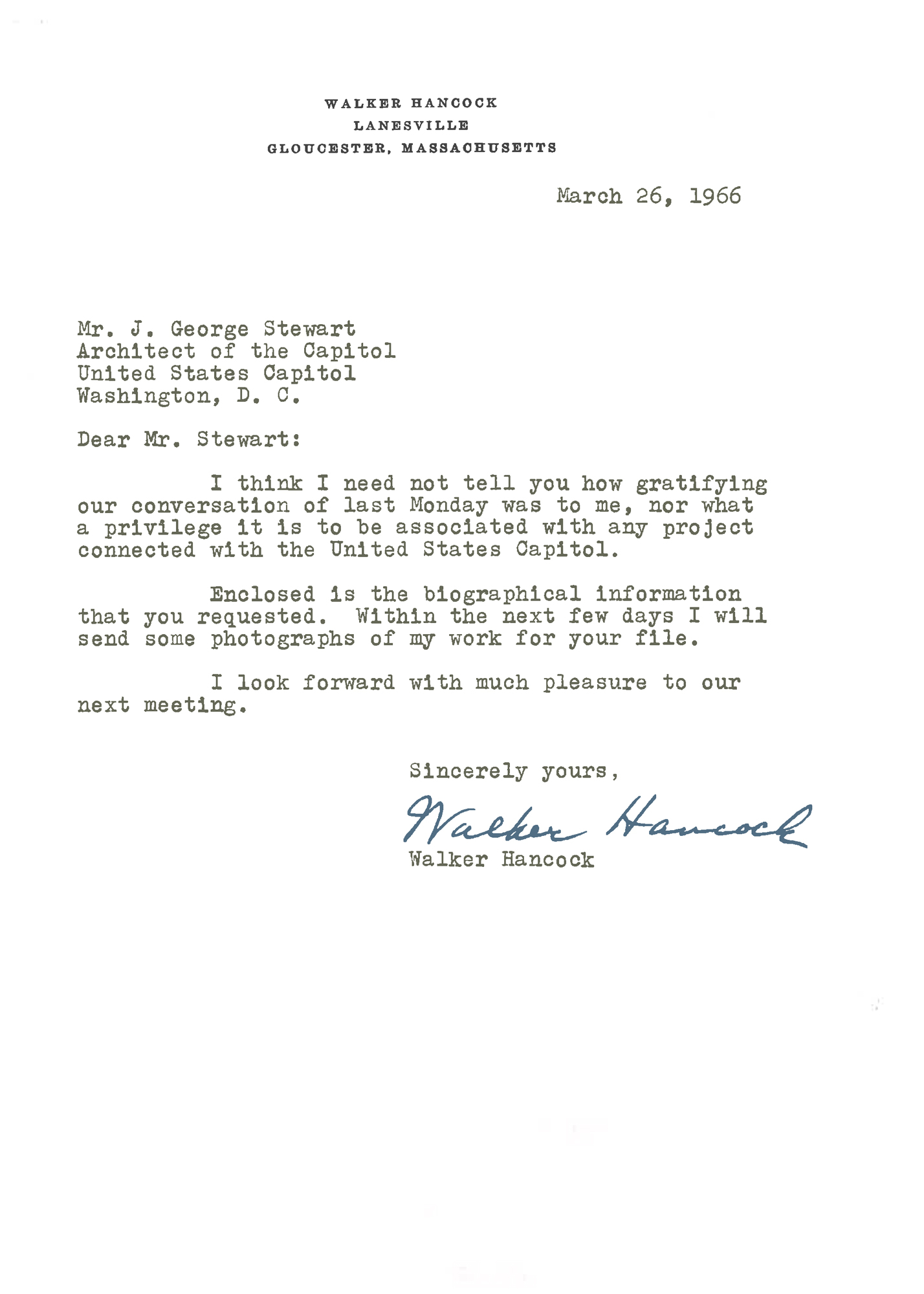 "We keep a list of sculptors who are suitably talented, and help the subject, if they're still alive, as in the case of the Vice Presidents, select from that list. Then we ensure that the sculpture is satisfactory to the subject and of a high quality, suitable for the Capitol."

The Architect of the Capiotol also manages the delivery, installation and maintenance of these artworks. In the case of the monumental Madison statue, the installation was no small feat.

When the full size statue–eight tons of Italian marble–was to be seated on the Vermont marble pedestal, a problem arose as to how to place it. According to an account of the day, workers finally placed ice cubes on the pedestal, lifted the Madison statue with slings, and then made adjustments and removed the slings as the ice melted.

A clever solution befitting the work of a man who risked his life to save Europe's greatest works of art and worked throughout his life to produce some of America's finest sculptures. Hancock was awarded the National Sculpture Society's Medal of Honor and a National Medal of Arts "for his extraordinary contribution to the art of sculpture, and for demonstrating the enduring beauty of the classical tradition."

Well aware of the traditions he continued, Hancock observed that as the Greeks invented democracy, they "also invented a new, and related use of sculpture," which had only portrayed kings or gods until then. "They began to carve images of ordinary mortals.... These statues made heroes of them. And that, I believe, is still one of the worthy functions of sculpture—to honor our heroes."

Fitting that he is not only portrayed onscreen as a war hero, but also honored as a hero of our democracy by the placement of his work atop America's acropolis. And fitting that his legacy is cared for by the mortals of the AOC, stewards of America's democracy.

Thank you so much for this post honoring my father. He was a really fine man.

Deane, I remember you from Conn College days. Your dad was a good and great man. Best wishes.

The events of January 6 left most of the nation at a standstill, but Architect of the Capitol (AOC) employees immediately went to work, restoring the building and grounds to their proper condition so that Congress could safely reconvene and inaugural preparations could get back on track.

By the Numbers: Presidential Inauguration 2021

Much goes into the presidential inauguration at the U.S. Capitol. Here are a few numbers that help set the stage for this special day.

Several of the men who first led tours through the U.S. Capitol are buried in Congressional Cemetery. In December 2019, a group from the Capitol Visitor Center Social Committee gathered at the cemetery to place markers on the graves of these guides and learn more about their lives.

Article themes and highlights include Beyond the Dome at Congressional Cemetery, Spotlight on Safety, Doing Good, a project update on the Olmsted lanterns and By the Numbers for Presidential Inauguration 2021.