Architect of the Capitol Honored for Excellence in Accountability Reporting

Blooming cherry trees, tulips, magnificent oaks and magnolias—these are the images conjured when thinking of the Capitol Grounds. However, there is another side to the Capitol Grounds, one that looks a little different—but is just as beautiful—especially if you like big jobs, big trucks and digging in the dirt.

This is a place where you’re unlikely to see many butterflies or a lot of pastel colors—this is a place where words like compacting, blades, grading, grinding and power take precedence.
“I love operating equipment,” says Frank Long, 23-year veteran of the AOC. “Especially the backhoe [John Deere 410-G, 4X4 backhoe with three-in-one bucket on front and 18 foot extend-a-hoe 24 inch bucket on back]. I am more comfortable in that than anything. It’s the most versatile and I can do more work with it—grading, digging, lifting. It’s got 4x4 and it can dig up to 18 feet deep.”
Welcome to the E Street Garage, where a band of ten men like Frank—who like digging in the dirt with big trucks—are the norm; and where the “boss” with nearly three decades of experience is a junior member of the team.
The Capitol Grounds Maintenance Division includes 22 individuals comprising three shops: automotive and small engine; plumbing; and masonry. The Maintenance Division is primarily responsible for supporting the Capitol Grounds Gardening Division through managing a fleet of nearly 40 vehicles, including front-end loaders and backhoes, and more than 200 pieces of small equipment, such as mowers and chainsaws; conducting irrigation and sewer maintenance and installations; and preserving the Capitol Grounds historic hardscape features such as the Olmsted walls and walks.
Wayne West is the general supervisor of the Capitol Grounds Maintenance Division, and though he is the “boss” of the E Street band with 28 ½ years in the AOC, he is still a junior member of the team. The senior dean of this group is Charlton Lewis with an astounding 48-year AOC tenure. Charlton heads one of the most important day-to-day operations of the Maintenance Division, the collection of garbage from across the Capitol and recyclables at the Capitol Visitor Center.
Operating the AOC garbage truck and ensuring the grounds of the Capitol are clean since 1962, Charlton collected more than 9,000 tons of waste from the Capitol Grounds during his tenure (including 182.5 tons in just the past seven months)—the equivalent of personally cleaning-up after more than 120 Super Bowls. 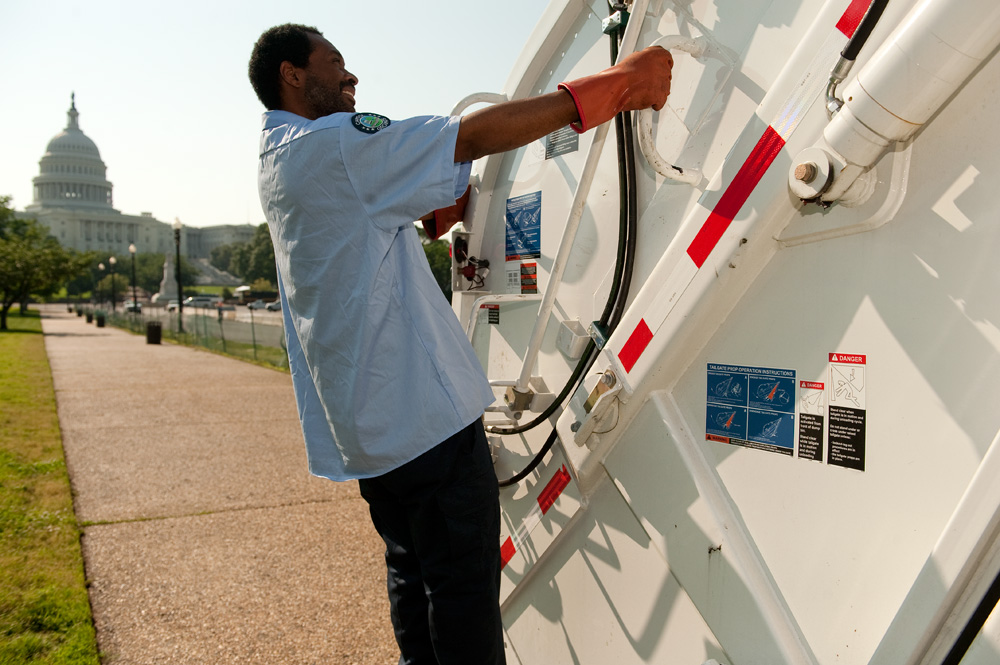 His team is comprised of himself and two materials handlers who do the climbing in and out of the truck hundreds of times a week; this includes the newest E Street member, Deonte Lane, with just a few months on Charlton’s truck.
“Just glad to be part of the team,” said Deonte.
Asked about the biggest change in 48 years—Charlton lifts his foot commenting, “This was the compactor when I began. I have two good material handlers right now though.”
Adds Deonte, “Packing with your feet…I don’t think I could have done that.”
“It wasn’t easy,” said Charlton.
Today, Charlton drives a brand new state-of-the-art 250 HP, 33,000 pound, 16-cubic yard compactor truck, with a six-speed automatic transmission and Leach compactor body with air brakes and features such as power adjustable mirrors, power-assisted can lift, back-up camera and an activation alarm to notify the driver to turn on the compactor.
Even with this new high-tech equipment, collecting garbage is not a clean business, and the crew has seen everything one can imagine might be found in the garbage of public parks. But what is the most unusual thing they have seen?
“You might find anything…I am going to tell you the truth, anything…,” said Charlton, pausing to consider the question. “Motor oil. Now… who could bring some motor oil to the Visitor Center?”
Will he stay on for another 48 years? “As long as I can walk,” said Charlton.
Beyond the trash collection, another role of the Capitol Grounds Maintenance Division is operating the heavy equipment. This includes equipment like the Bobcat Versi-handler 4X4 all wheel steer material handler capable of lifting 5,000 pounds 16 feet high; a Case Loader 521 DXT with clam bucket, 3-in-1 bucket and a set of forks (for handling materials), articulating steering; and A-300 Bobcat mini-loaders with multiple attachments, including snow blowers and a 36” auger for setting up the Capitol Christmas tree.
They use this equipment for jobs such as installing fire hydrants and backflow preventers that include laying 8-inch pipe, 20 feet long, 20 feet below the surface around the Capitol Grounds that include a maze of wires, plumbing, and tunnels; some marked—some not—and some nearly 200 years old.
“There is plenty of stuff buried in the ground up here,” said Wayne.
Frank Long adds, “It is pretty neat. I remember working on the Senate side on the west front, digging down more than 20 feet and found a cobble stone roadway—still hard like they just laid it.”
Under the direction of Robert Somerville, AOC automotive shop foreman, five automotive mechanics repair and maintain the Capitol Grounds Division trucks and heavy equipment. The mechanics perform a 27-point road worthiness inspection for the AOC’s entire 130 vehicle fleet to ensure employees are safe.
The garage also literally fuels the AOC, operating a fuel station that supplies E85 to the AOC fleet and several other legislative branch organizations. E85 is the term for motor fuel that is a blend of 85 percent ethanol and just 15 percent gasoline. E85 is an alternative fuel that burns cleaner than gasoline and is completely renewable and domestically produced.
Outside the garage, the team is also responsible for more than eight lane miles of roads and 17 acres of parking lot. This includes snow removal where the team’s objective is to plow down to pavement within 24 hours of a snowfall. A job made difficult when two blizzards hit back-to-back in February of 2010 but they worked around the clock and cleared the Capitol.
Ultimately the hard work of the Maintenance Division of Capitol Grounds is manifested by what you don’t see—garbage is removed, water mains flow properly, and walks and paths are maintained year-round.
The collective service of the Capitol Grounds Maintenance Division helps keep a functional and beautiful place for all who work on and visit the Capitol.
As Wayne concludes, “We do whatever it takes to get the job done.”
—Matt Guilfoyle
Read the Full Summer 2010 issue of Foundations & Perspectives