This painting depicts Christopher Columbus and members of his crew on a beach in the West Indies, newly landed from his flagship Santa Maria on October 12, 1492. The island landing was the first landfall of their expedition to find a westward route from Europe to China, Japan and perhaps unknown lands. American neoclassicist painter John Vanderlyn (1775-1852) was commissioned by Congress in June 1836 to paint the Landing of Columbus for the Capitol Rotunda. It was installed in the Rotunda by early January 1847.

In this painting, Christopher Columbus and members of his crew are shown on a beach in the West Indies, the first landfall of their expedition to find a westward route from Europe to China, Japan and perhaps unknown lands. On October 12, 1492, they reached this island, which the natives called Guanahani and Columbus named San Salvador.

The setting of the painting is a narrow beach at the edge of a wooded bay or inlet. Columbus, newly landed from his flagship Santa Maria, looks upward as if in reverent gratitude for the safe conclusion of his long voyage. With his left hand he raises the royal banner of Aragon and Castile, claiming the land for his Spanish patrons, and with his right he points his sword at the earth. He stands bareheaded, with his feathered hat at his feet, in an expression of humility. 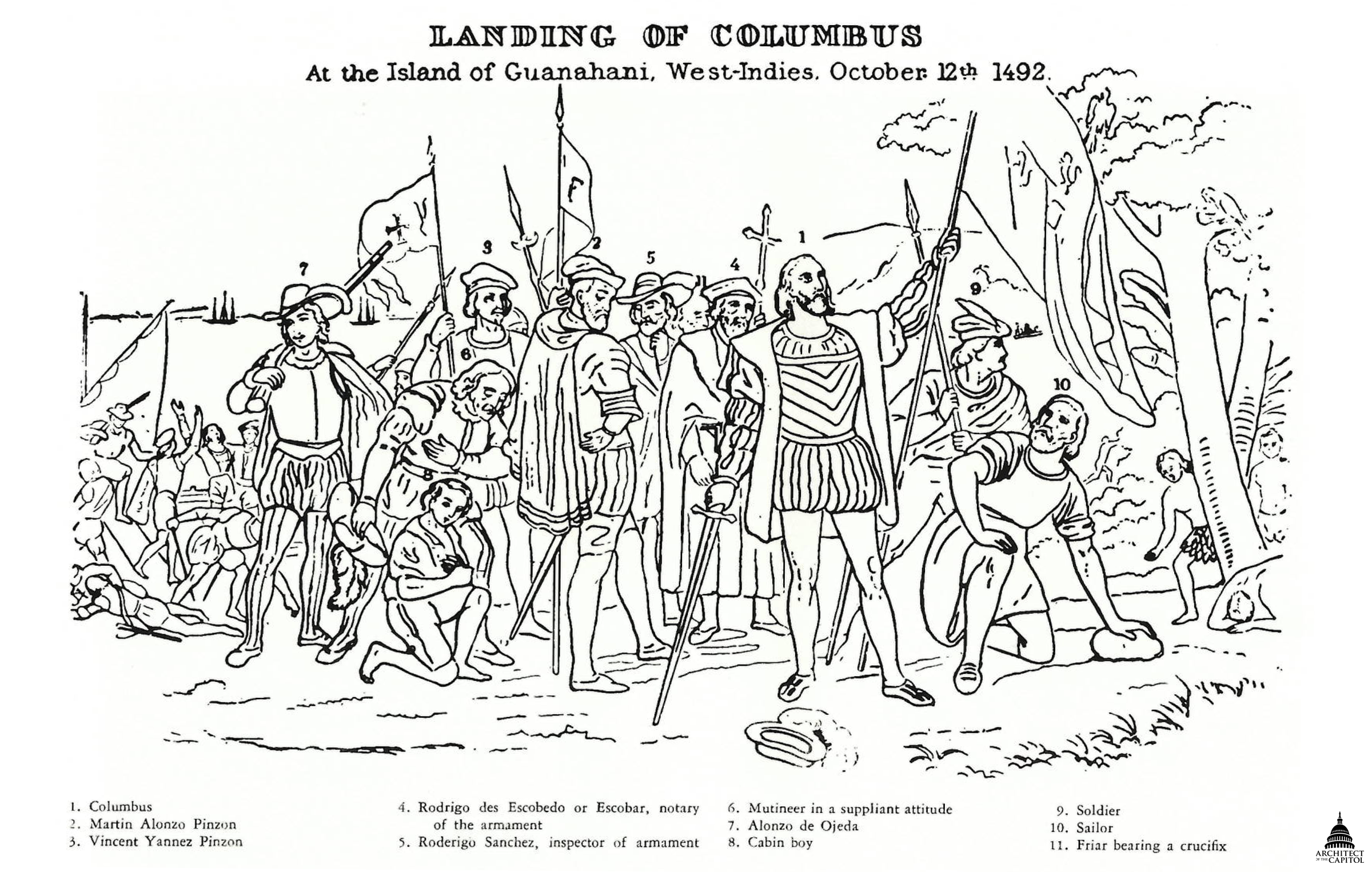 The other Europeans grouped near Columbus represent various classes of society. Behind Columbus and to his right, the captains of the ships Niña and Pinta carry the banner of King Ferdinand and Queen Isabella, and a friar holds up a metal cross. To his left, a sailor kneels, gazing upward, and a soldier looks warily into the woods, where native West Indians watch the visitors from behind a tree. Farther behind Columbus, a cabin boy kneels and a mutineer bows in a penitant attitude. Throughout the central group soldiers carry spears, and the inspector of armament shoulders a musket. At the left side of the painting, more crew members land a small boat as their comrades display a range of reactions, some seeming jubilant at reaching the shore and others eagerly seeking to pluck gold from the sand.

In the foreground of the scene, a fallen tree and spiky, broad-leafed plants suggest that a new and unknown world begins only a few paces from the explorers’ feet. At the right edge of the painting, the natives blend into the forest of tall deciduous trees. Palm trees can be seen near the water’s edge in the middle distance and along the top of the hill at the horizon. Out on the ocean lie the expedition’s three ships, silhouetted against a rising sun.

American neoclassicist painter John Vanderlyn (1775–1852) was commissioned by Congress in June 1836 to paint the Landing of Columbus for the Capitol Rotunda. He worked on this canvas at his studio in Paris with the help of assistants. Upon its completion in the late summer of 1846 he reportedly hoped to exhibit the painting in various principal cities, but by October 3 he had arrived with it in New York, and it was installed in the Rotunda by early January 1847.

The painting has undergone various cleaning, revarnishing, relining, repair, and restoration treatments over a dozen times since its installation. In 1982 the painting was attached to an aluminum panel to help it resist the effects of changes in temperature and humidity. All of the Rotunda paintings were most recently cleaned in 2008.

This painting may be Vanderlyn’s most widely distributed work. In 1869 it appeared on a 15-cent stamp (which, with a brown frame and blue center vignette, was the first bi-color stamp issued by the United States), and in 1893 it was used on a 2-cent stamp among the nation’s first commemorative stamps, the Columbian Exposition Issue. It also appeared on the reverse of a 5-dollar bank note issued in the 1870s.

John Vanderlyn was born at Kingston, New York, on October 18, 1775. He studied under renowned portrait artist Gilbert Stuart and became a protegé of Aaron Burr, who in 1796 sent him for five years’ study in Paris—making him the first American painter to study there rather than in England. Returning to the United States in 1801, he painted portraits and landscapes. Two years later he traveled back to Europe and painted in England, Rome, and Paris, where his painting Marius amid the Ruins of Carthage was awarded a gold medal. In 1815 he resumed his work in America, exhibiting panoramas and painting portraits. His subjects were chiefly prominent Americans, including Robert R. Livingston, James Monroe, John C. Calhoun, George Clinton, Andrew Jackson, and Zachary Taylor; his 1834 full-length portrait of George Washington (after Gilbert Stuart) is displayed in the Hall of the House of Representatives in the U.S. Capitol. Landing of Columbus would be the last major work of his career, which fell into decline. He died in poverty in Kingston on September 23, 1852.