The richly patterned and colored Minton tile floors are one of the most striking features of the extensions of the United States Capitol. They were first installed in 1856, when Thomas U. Walter was engaged in the design and construction of vast additions to the Capitol (1851-1865). For the floors in his extensions, Walter chose encaustic tile for its beauty, durability and sophistication.

One striking example of the contrast between the interiors of the Old Capitol (finished in 1826) and the extensions (begun in 1851) may be seen in the differences in flooring materials. In the Old Capitol, stone pavers were used in corridors and other public spaces, such as the Rotunda and Crypt, while brick was used to floor committee rooms and offices. These materials, although durable and fireproof, would have looked plain and old-fashioned to the Victorian eye. In the mid-19th century, encaustic tile flooring was considered the most suitable and beautiful material for high-traffic areas. 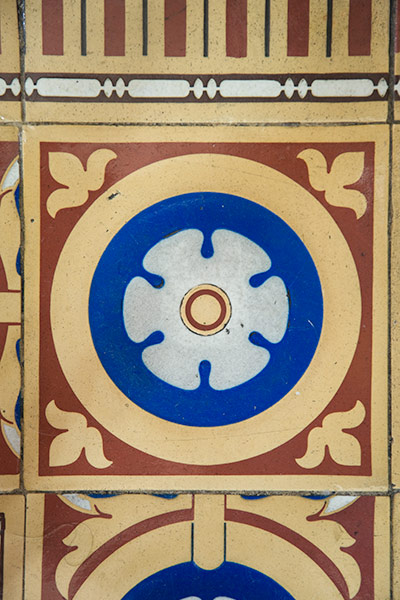 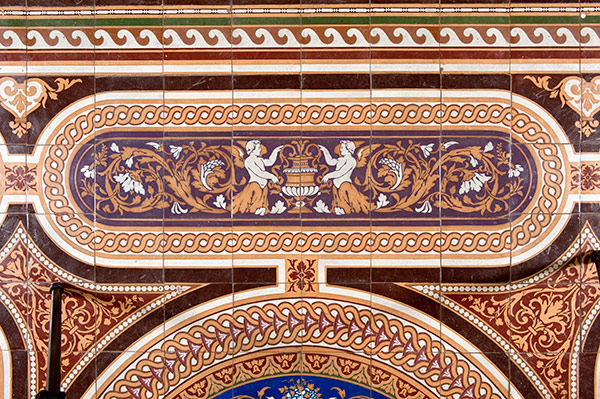 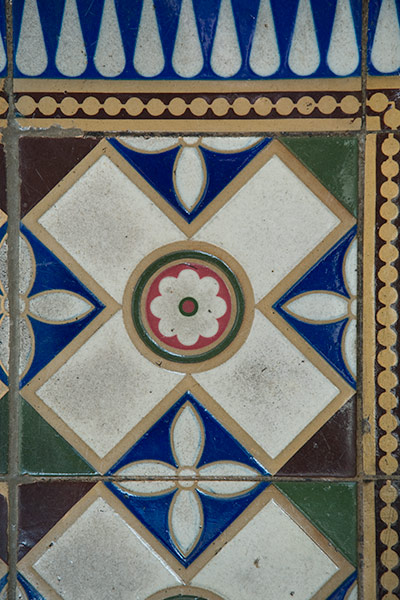 Unlike ordinary glazed tile, the pattern in encaustic tile is made of colored clays inlaid or imbedded in the clay ground. Because the color is part of the fabric of the encaustic tile, it will retain its beauty after years of wear. One observer noted:

"The indestructibility of tiles may be judged from the fact that the excavations at Pompeii have unearthed apartments where painted tiles are just as beautiful, the colors as fresh and bright as... when the fated city was in all its glory."

Two types of tile were used at the U.S. Capitol: plain and inlaid encaustic tiles in a range of colors. Plain tiles were used as borders for the elaborate inlaid designs or to pave large corridor areas. They were available in seven colors: buff, red, black, drab, chocolate, light blue and white. Additional colors, such as cobalt blue, blue-gray, and light and dark green, appear in the inlaid encaustic tiles that form the elaborate centerpieces and architectural borders. They were made by "filling indentations in the unburnt tile with the desired colors and burning the whole together." 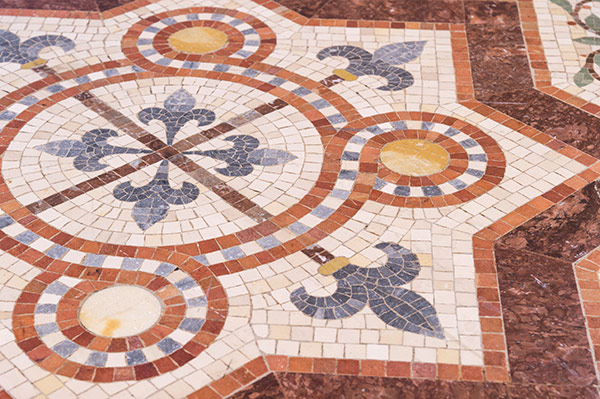 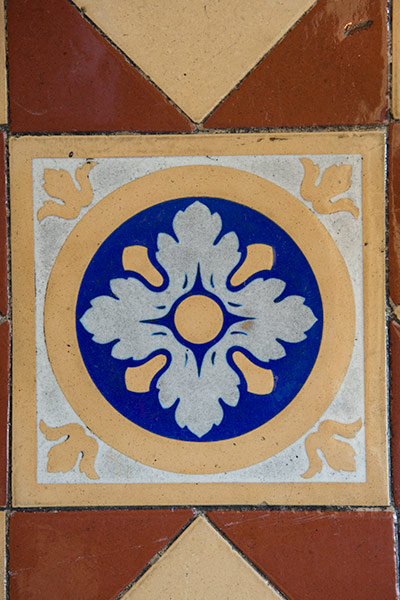 The patterns and designs formed in the inlaid tiles were limited only by taste and imagination. They include geometric patterns such as the Greek key, guilloche, and basket weave; floral designs such as the fleur-de-lis; and figures such as dolphins and classical heads. Few of the patterns are repeated. Although most of the tiles are six-by-six-inch squares, some are round, triangular or pie-shaped. Approximately 1,000 different tile patterns are used in the corridors of the Capitol alone, and up to 100 different tiles may be needed to create a single design.

The original encaustic tiles in the Capitol extensions were manufactured at Stoke-upon-Trent in Staffordshire, England, by Minton, Hollins and Company. The firm's patented tiles had won numerous gold medals at international exhibitions and were considered the best tiles made. In 1876, having seen Minton's large display at the Centennial Exhibition in Philadelphia, one critic wrote, "Messr. Minton shone superior to all exhibits of the sort... and may be cited as showing the highest results in tile-pottery achieved by modern skill and research."

Beginning in 1856, and continuing for five years, the tile was installed by the import firm of Miller and Coates of New York City. For the journey from New York to Washington, the tiles were packed in wooden casks weighing about 1100 pounds; each cask contained enough tiles to pave about 100 square feet. The cost of the tile ranged from $0.68 to $2.03 per square foot.

Thomas U. Walter had every reason to believe that the encaustic tile floors would last as long as his extensions stood. One visitor noted in 1859 that the tile floors vied with the beauty of marble and surpassed it in durability. While perhaps valid for other installations, however, this prediction proved overly optimistic for the Capitol Building. By 1924, the Minton tile was removed from the corridors in the first and second floors of the House Wing and replaced by "marble tile in patterns of a simple order." In that day, marble was selected for its superior durability and because suitable replacement tile was difficult to find.

In the 1970s, however, a similar condition prompted a very different response. In 1972, a search was undertaken to determine a source of similar tiles in order to restore the original appearance of the building. Inquiries were made of all major American tile manufacturers, the American Ceramic Tile Manufacturers Association, and even Mexican and Spanish tile suppliers. Although the colors and designs could be reproduced relatively easily, the patterns would quickly wear because they would be applied to the surface. The "inlaid" feature of the encaustic tiles, i.e., the approximately 1/8-inch thickness of the pattern and color, is the characteristic that enables the Minton tiles to be walked upon for over 100 years without signs of wear. It was this technique that formed the basic difficulty of manufacture.

Finally, as a result of the Capitol's needs becoming generally known, the Architect of the Capitol was placed in contact with H & R Johnson Tiles Ltd., located at Stoke-on-Trent, England. It was discovered that that firm was a successor company to the Minton Tile Co. and had even retained many of the original hand tools and forms in a private museum at the company's manufacturing site.

Contact was then made with Mr. James Ellis, the Directing Architect of Ancient Monuments and Historic Buildings for the Crown. He had been trying for many years to establish a program for the replacement of the worn Minton tiles at the Houses of Parliament but had more or less given up the attempt because of H & R Johnson's continued unwillingness to revive the encaustic tile process. However, the restoration work at the Arts and Industries Building of the Smithsonian Institution was in process at about the time the needs of the Capitol became known; it thus appeared that a market for such tiles was developing to the degree that the manufacturer began to reconsider its prior position. The company thus began the experiments that finally led to the present availability, after many decades, of the original Minton-type tiles.

Because the tiles in the Capitol are more decorative and have more complicated designs and color combinations than those in either the Houses of Parliament or the Smithsonian, those institutions were able to obtain replacement tiles sooner than the Capitol. The lessons learned in the manufacture of the simpler tiles served as a basis for filling the later needs.

Color photographs and full-sized drawings of the many required patterns were made and recorded, and many developmental submissions were made as the hand-made manufacturing process was re-developed. Finally, in 1986, the first acceptable tiles were delivered. The installation process was accomplished with modern cement adhesives and has yielded excellent results.

The program enabled the original tiles to be replaced with exact replicas. This project began on the first floor of the Senate wing, where the effects of 130 years of wear and tear were most noticeable. Replacement tile was closely scrutinized to ensure fidelity to the nineteenth-century originals. While difficult and slow, this process is the only fitting response to the history of the Capitol extensions, not only to restore the original beauty and elegance of these unique floors, but also to provide for their continuing attractiveness for the foreseeable future.