Renovated Bartholdi Park is a SITE(S) to Behold

Whatever the task, tools are essential to our work at the Architect of the Capitol (AOC), and this latest example of an AOC "cool tool" ranks among the hottest and fastest tools we use.

It generates temperatures of 35,000 degrees Fahrenheit or more and accelerates to nearly the speed of sound. Those extreme but highly controlled conditions allow the tool to cut through metal like a hot knife through butter.

And do so with precision.

The cool tool is a computer numerical control (CNC) plasma cutter. Located in the House Office Building's Sheet Metal Shop, the tool was acquired about three years ago and allows the shop to cut metal parts, components and signage that it could never before do efficiently, if at all. 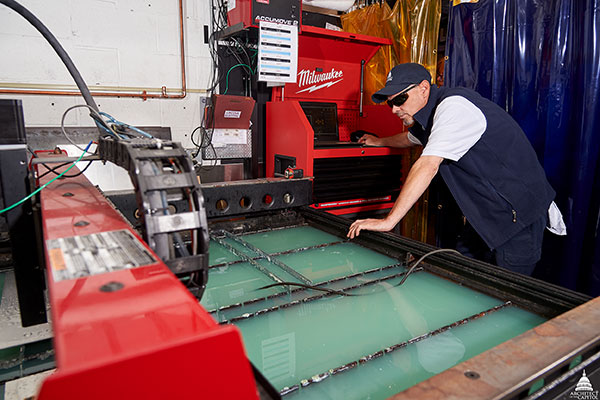 AOC's George Calloway works the plasma cutter, which only requires one person to operate.

The tool rests on a 4-by-4-foot table filled with water, which helps absorb the heat and sparks generated by the plasma cutting torch. The material to be cut is placed on the table on a grid raised just above the water level; above that looms the controller, a bar that straddles the table and holds and guides the plasma torch in any direction.

The plasma torch works by pushing compressed air through the torch nozzle while charging the air until it becomes a super-heated, high-velocity plasma jet that slices through molten metal. It cuts according to whatever design was created by computer-aided design (CAD) software, which is sent from a laptop to the controller. The plasma torch is used on conductive metals including steel, aluminum and brass up to 4-by-4-feet in size, with thicknesses ranging from 1/8-inch to an inch or more. 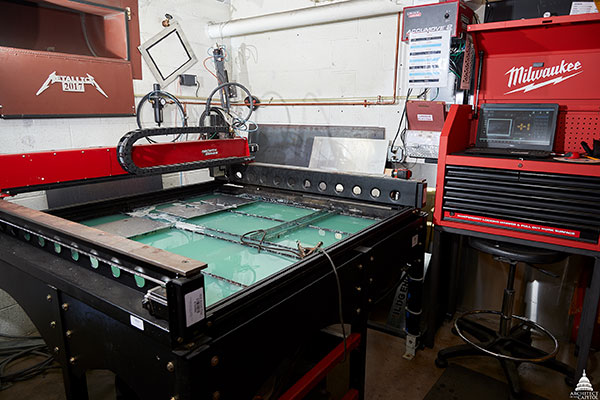 Sheet Metal Shop Supervisor George Calloway demonstrated how the plasma cutter works by creating an approximately 6-inch-diameter star cut from a 1/8-inch-thick sheet of scrap aluminum. First, Calloway secured to the table the 1-by-2-foot rectangle of aluminum. Then, using CAD software on a laptop, he quickly designed the star to be cut.

Before the plasma torch was fired up, any observers not wearing shade 3 protective eyewear — required for workers who operate the machine — were asked to stand behind a yellow- or green-tinged plastic curtain to protect their eyes from the powerful ultraviolet (UV) light emitted by the plasma. The UV light is dangerous to unprotected eyes and is akin to staring at the sun.

That's because the sun is also made of plasma, an extremely hot, ionized (energized) gas that constitutes the fourth state of matter — after solid, liquid and gas. About 99 percent of all matter in the universe is plasma including stars, so it's fitting that a star symbol was cut as an example of what the plasma cutter can do. Due to plasma's intensely high temperatures it is less common on earth, but examples of it occurring in nature include lightning and auroras (northern and southern lights). 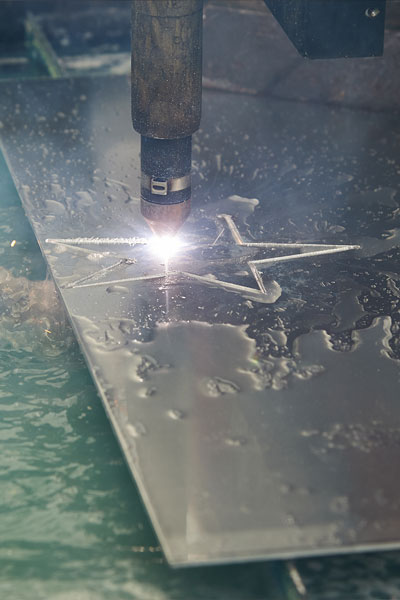 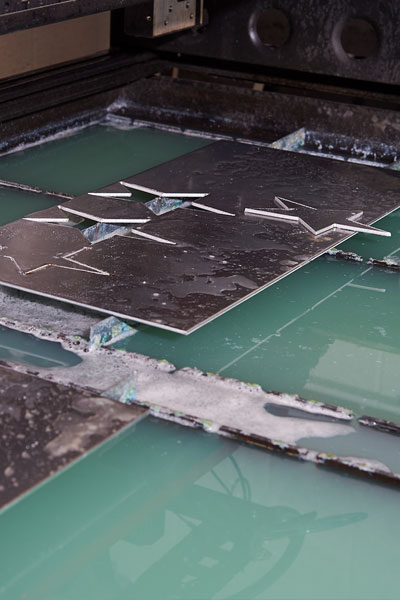 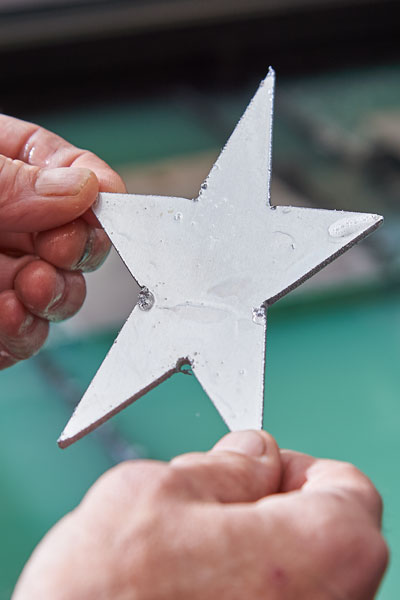 Sparks fly as the plasma torch cuts stars out of an aluminum sheet within seconds.

As the plasma torch began cutting out the star, brilliant bursts of sparks and light seared through the aluminum as the torch followed precise lines and angles defined by the software. It finished within seconds. Moments later, Calloway held up the result — a damp but distinct five-pointed star that needed minimal finishing.

"We recently cut drain covers for Rayburn, 7-inch round circles with 20 half-inch circles inside each one," Calloway said. "We made 30 of those in three hours. If we had to do that by hand, it would probably take an entire shop three months to finish."

By contrast, it only takes one person to operate the machine. "The plasma cutter has saved us significant resources," said House Office Buildings Assistant Superintendent Ryan Columbo.

"It’s a 'cool tool' because it saves a lot of time and does things we couldn't do before," Calloway said. "It makes a perfect circle and a perfect square every time. You couldn't do that by hand. So that’s pretty cool."

Great technology!
Interesting! Thank you, Kate.
That is remarkable, especially the precision to which it cuts. Nice article.
As a retired Pipefitter, I know the value of this plasma cutter, yes fast, but more important the accuracy was outstanding. Safety is improved. This will become more "in usage" as time goes on. Thank you for this service.