Deciphering the Calendar Stone in the Capitol Rotunda

The Mayan Calendar has drawn a lot of attention lately, largely surrounded by myth and misunderstanding. This story investigates a lesser-known scene in "The Frieze of American History" by Constantino Brumidi in the Rotunda of the United States Capitol in Washington, D.C.

Architect of the Capitol's (AOC) Matt Guilfoyle investigates the myth of the Mayan Calendar at the U.S. Capitol.

The Mayan Calendar has drawn a lot of attention lately, largely surrounded by myth and misunderstanding. It has even drawn focus to a lesser-known image in "The Frieze of American History" in the Rotunda of the United States Capitol.

The scene, "Cortez and Montezuma at Mexican Temple," (shown above) depicts the Spanish conqueror of Mexico, Hernando Cortez, entering a temple in 1519, where he is welcomed by Emperor Montezuma II. Behind the men is an ancient calendar stone, which many believe shows the famous Mayan Calendar (of December 21, 2012 infamy) – they are mistaken. In fact, the temple depicted here belongs to the Aztecs, not the Mayans, and the Calendar Stone is the Aztec Sun Stone or 'Stone of the Suns.' While this scene in the frieze has been used in relation to the myth surrounding the Mayan calendar, it is actually completely unrelated.

The scene is one of 19 in the frieze, 58 feet above the Rotunda floor, by Constantino Brumidi. It was painted in 1878, based on a suggestion by engineer of the Capitol, Montgomery Meigs, who developed the concept for the frieze to depict a chronological sequence of events. Brumidi based "Cortez and Montezuma at Mexican Temple," on his experiences and travels in Mexico in 1854 before he came to Washington, D.C. 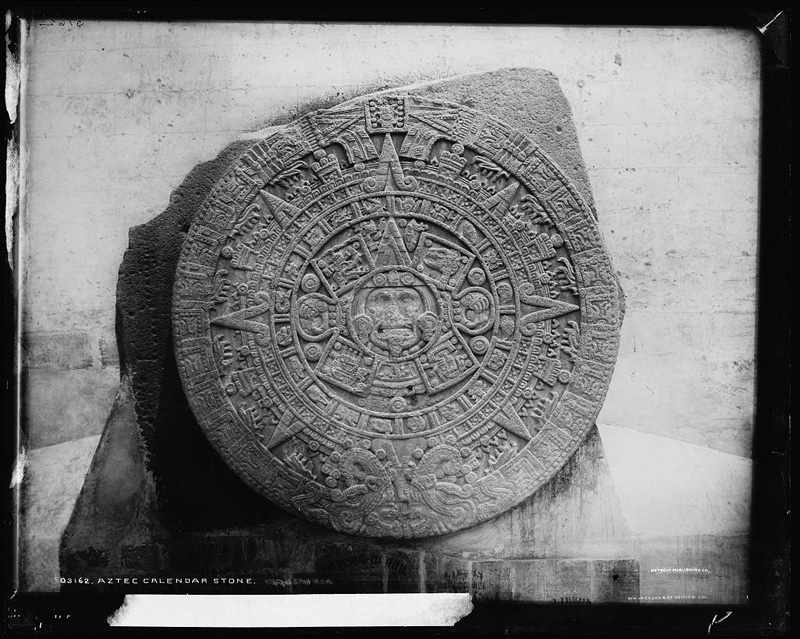 While in Mexico City, Brumidi sketched Aztec idols and the large Aztec Calendar Stone then on display in the Western Tower of the Metropolitan Cathedral. The stone was moved to the Museo Nacional de Antropología in Mexico in 1855, where it remains to this day.

Much of the attention on December 21, 2012, comes from the timekeeping system of the ancient Maya – not the Aztecs – who according to Smithsonian's National Museum of the American Indian, "developed ceremonial and agricultural calendars (Tzolk'in, Haab and Long Count) using a deep understanding of the sun's movements and the cycle of corn."

As the Smithsonian further explains, "December 21, 2012 signals the much-anticipated passing of the 13 B'ak'tun, a cycle in the timekeeping system of the ancient Maya, who developed ceremonial and agricultural calendars (Tzolk'in, Haab and Long Count) using a deep understanding of the sun's movements and the cycle of corn."

So if you are interested in learning more about the predictions for December 2012, you won't find them at the Capitol, but you can visit the Smithsonian National Museum of the American Indian. They are holding a festival Friday, December 14, through Sunday, December 16, that debunks Mayan Doomsday with a Bak'tun 13 Festival. Visit their site for more information.

The Architect of the Capitol is not affiliated with the Smithsonian Intuition.