Capitol Dome Restoration: What it Takes

The Architect of the Capitol (AOC) recently completed a multi-year project to completely restore the Dome of the U.S. Capitol Building, one of America's great symbols of freedom. Frequently asked questions about this project are available below.

Why was the Capitol Dome under restoration?

Because the Capitol Dome is predominately made of cast iron, exposure to rain, snow, sleet and sun caused damage to its exterior. Water infiltrated through pin holes in the Statue of Freedom, and through cracks and open joints throughout the exterior shell including: the tholos balustrade, the base of the cupola and the boilerplate balcony level. Leaks in the interstitial space promoted the rusting of the ironwork and the failure of the protective paint coatings. 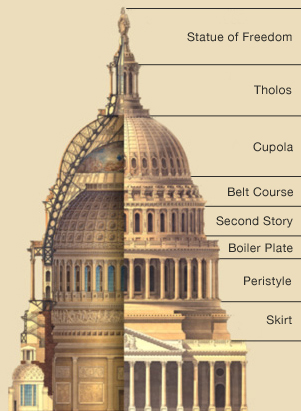 Additionally, decorative elements that give the Capitol Dome its unique character were rusting, and in some cases falling from the structure. If these repairs were not made, the artwork in the Rotunda, including the Apotheosis of Washington and the Frieze of American History, were at great risk of damage due to water leaks.

What was the purpose of the project?

This project was a critical step for stopping the current level of deterioration in the Dome's cast iron as well as ensuring the protection of the interior of the Dome and Rotunda. The previous significant exterior renovation of the Dome was performed in 1959-60 when it was stripped of its paint so the ironwork could be repaired and primed with a rust inhibitor. As part of its comprehensive project planning process, the Architect of the Capitol is undertook this similar renovation. The restoration project included removal of old paint, repairs to the cast iron and repainting.

Why did this project happen now?

Postponing the restoration would have perpetuated the deterioration of the Dome. The flaking and peeling of paint would have substantially increase resulting in an unsightly appearance. In 2010, it was noted that items identified in a 2001 study had further deteriorated, resulting in repairs that are more complex and costly. As conditions continued to deteriorate, the safety of visitors to the Capitol is threatened by falling objects. Installation of safety netting to the Capitol Rotunda is required to protect visitors during the restoration process.

Was the project on budget?

Yes, the Dome Restoration Project stayed within its authorized budget for the project.

What are the benefits of the project?

The project improved the quality of the Capitol Dome and provides protection from the elements for the next 50 years to preserve one of the nation's most iconic structures. There is only one Capitol Dome, and the Architect of the Capitol is committed to preserving it for generations to come.

What was the sequence of work for the project? In November 2013, the Architect of the Capitol awarded the contract to support the Dome restoration and provided notice to the contractor to begin work. Following this notice, the AOC worked with the contractor to finalize project timelines and scaffold designs. Once the timeline plan was complete, the contractor conducted on-site surveys, installed fencing and began protecting invaluable artwork and statuary in the Capitol Rotunda.

Next, equipment and materials for the restoration work arrived on Capitol Grounds, vertical scaffold towers allowed workers to reach the Dome were installed on the West Front, during this time a protective netting system was installed in the Capitol Rotunda. Installation of scaffolding on the outside the of the Dome followed, beginning at the boiler plate (base) and peristyle levels (lower columns) of the Dome, and over time reached the base of the Statue of Freedom.

When was this project completed?

The Architect of the Capitol successfully met its obligation of completing the Dome Restoration Project before the 2017 Presidential Inauguration.