We have made some interesting discoveries about the details of the sculptures and the sources of some of the depicted figures; we discovered and solved a few puzzles, and we also came across a few mysteries that we're still working on (and we'd welcome your help!).

Since 1863, Thomas Crawford's marble sculptural group Progress of Civilization has stood in the pediment above the Senate doors on the East Front of the Capitol. Its details have always been difficult to see from the ground, but the scaffold erected for the recent stone restoration project has allowed curators to examine Crawford's work up close, and the Architect of the Capitol (AOC) Photography Branch has been able to do extensive photo documentation. As a result, we have made some interesting discoveries about the details of the sculptures and the sources of some of the depicted figures; we discovered and solved a few puzzles, and we also came across a few mysteries that we're still working on (and we'd welcome your help!).

In 1853, Captain Montgomery C. Meigs, the Supervising Engineer of the Capitol Extension project, took the advice of Senator Edward Everett and solicited designs from two expatriate American sculptors: Hiram Powers of Greek Slave fame, based in Florence, and the younger Thomas Crawford, based in Rome. In his correspondence with the artists, Meigs suggested that Powers could execute the pediment for the north wing and Crawford could do a complementary design for the south wing. Meigs, who compared the Capitol Extension to the Parthenon, clearly wanted symbolic sculpture to adorn the building, and he sought sculptural designs even before the architecture was in place to accommodate them. At the time he wrote to the sculptors, drawings of the new wings did not include a pediment, but terminated in balustrades. Powers declined, but Crawford eagerly accepted, and in October 1853 he sent Meigs photographs of his proposed clay sketch for the north wing. Meigs was enthusiastic about Crawford's designs and praised them in his letter of November 28, 1853, advising Crawford that he would need the approval of Secretary of War Jefferson Davis and President Franklin Pierce before he could authorize Crawford to begin modeling.

Crawford's conception for the Progress of Civilization mirrored many of the ideas that he and Meigs had shared in their correspondence. Presumably, Meigs was also communicating the sentiments of his superior, Secretary of War Jefferson Davis, who did not conceal his expansionist biases. In an August 18, 1853, letter to Crawford, Meigs explained his world view, writing, "In our history of the struggle between civilized man and the savage, between the cultivated and the wild nature, are certainly to be found themes worthy of the artist and capable of appealing to the feelings of all classes." 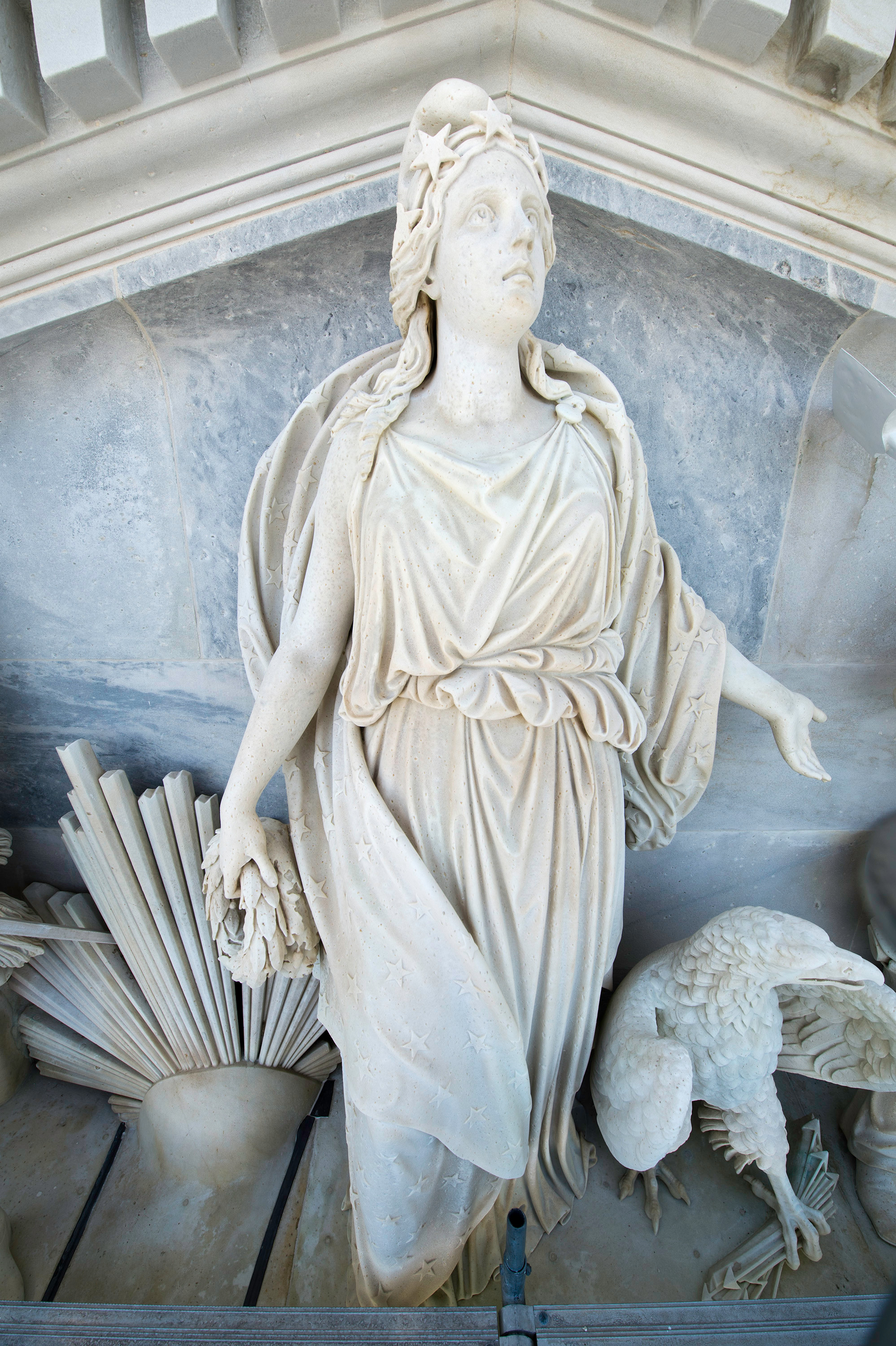 The figures and scenes that flank Crawford's central figure of America illustrate the expansion of western civilization with its tools, knowledge, and values—and the concomitant demise of indigenous people. In the center stands America, who wears a liberty cap (despite Jefferson Davis's request that Crawford omit this reference). She is wrapped in robes emblazoned with stars, her eyes raised heavenward and left hand extended in a beseeching gesture, as if asking for Divine guidance. An eagle stands at her side and the sun rises behind her. In her right hand she holds a laurel wreath and an oak wreath, signifying military and civic success. On her left, a woodsman, coiled snake in the grass, youthful Indian hunter, Indian chief, Indian mother and child and Indian grave represent the pre-colonial period of America. On her right, the diversity of human activities associated with the development of modern nations is suggested by the soldier, the merchant, the two youths, the schoolmaster and child, and the mechanic with a hammer and cogwheel. Completing this side of the tympanum are sheaves of wheat, symbolic of fertility, and an anchor, symbolic of hope; these elements contrast with the Indian grave adorned with delicately carved flowers at the opposite end of the tympanum.

Crawford conceived the pediment as a series of individual sculptural groupings, each an independent vignette frozen in isolation as if arrayed on a stage. Each figure sits on its own self-base, and the whole is pieced together like a puzzle. Crawford modeled the complex sculptural program over a period of about two and a half years, between the fall of 1853 and the spring of 1856.

Sheaves of wheat, a mechanic with rolled sleeves and the snappy dress of a school master.

One of the most surprising aspects of the pediment is the three-dimensionality of the individual sculptures, with front, back and sides carefully modeled, despite the fact that these views would not be visible from the ground. Little is left to the imagination of the viewer. Details like the bunches of seed heads on the sheaves of wheat, the mechanic's rolled up sleeves and the elegantly attired schoolmaster with his arm around his young pupil are all intricately carved. Crawford presented complete scenes, even including a sundial and a geometry lesson incised on a scroll of papers next to the schoolmaster. Some of the figures are generalized, but others are clearly meant to be specific individuals. 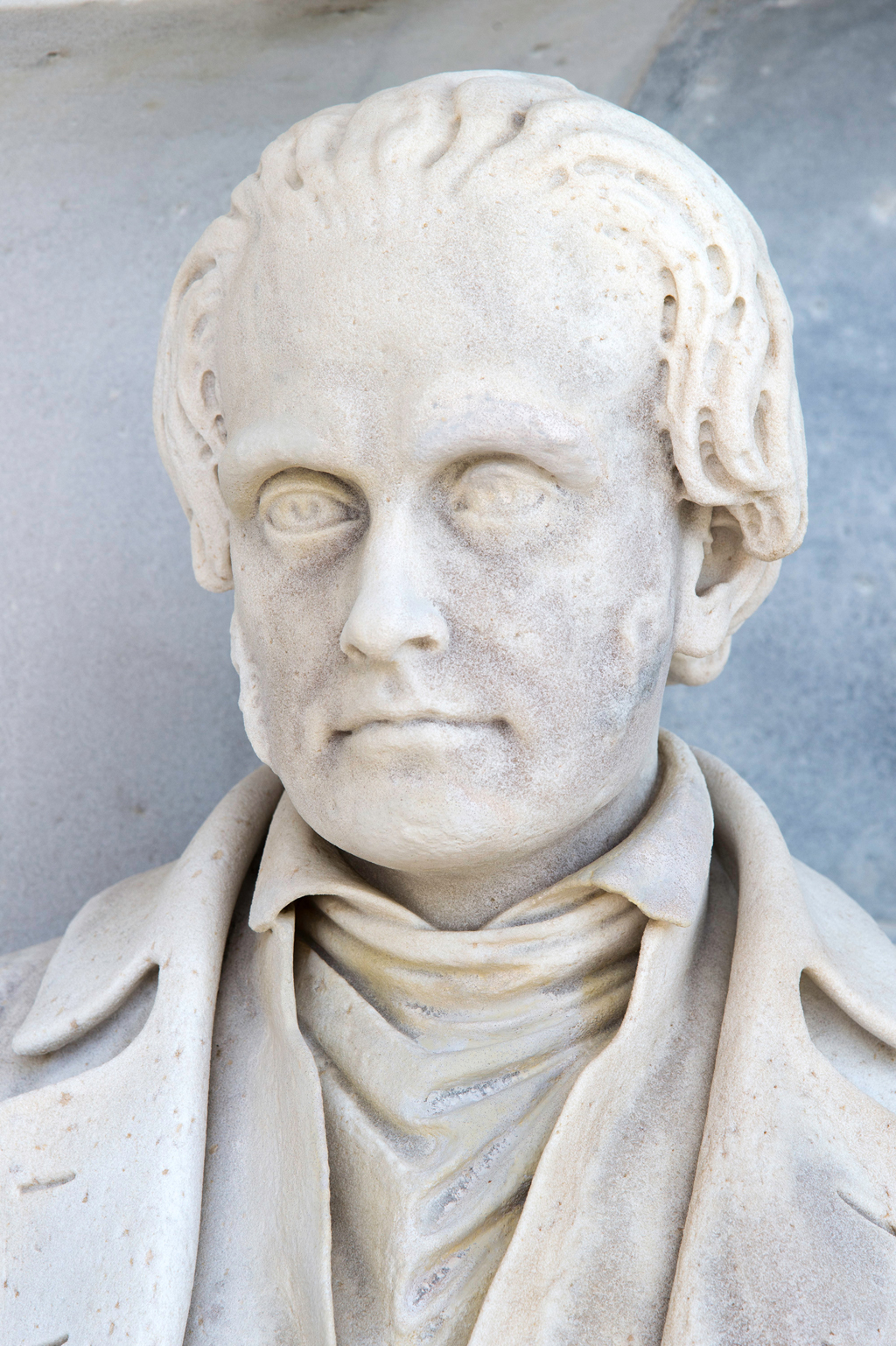 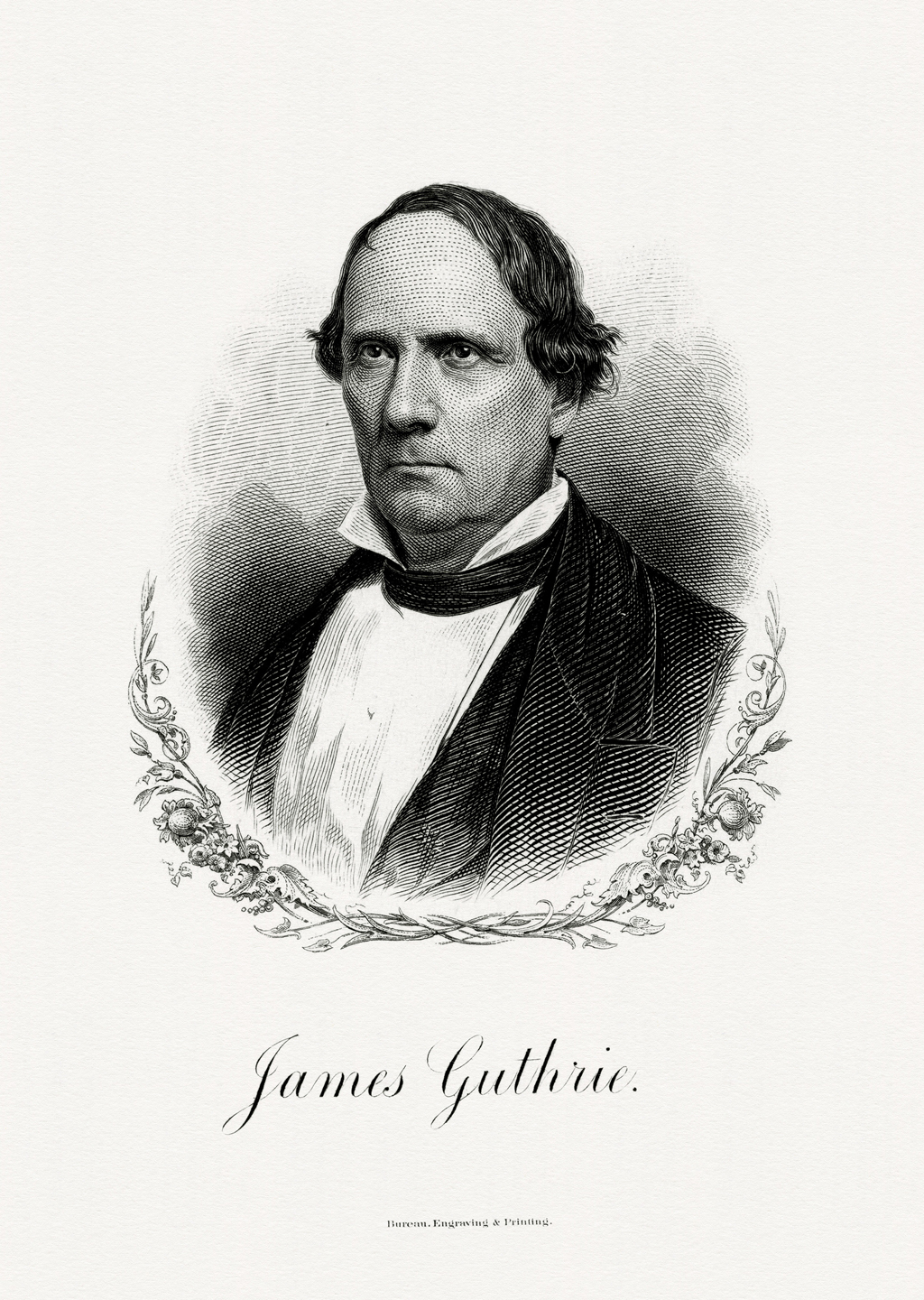 We recently discovered that the figure of the Merchant is a portrait and bears a striking resemblance to James Guthrie (see photo above), who had just been appointed Secretary of the Treasury under President Franklin Pierce in 1854, as Crawford was working on the pediment. The figure's hand is on a globe, and the index finger directs our attention to the general area of Europe, faintly outlined. The 1854 date coincides with the Treaty of Kanagawa, which opened Japan to trade with the United States, another possible reference. Next to him are packages suggesting bales of cotton, which was obviously essential to American trade.

Numbers found on the pediment.

Not at all obvious, however, is the meaning of the numbers inscribed on the block below his proper right foot and the adjacent bags of money on the ground: "$28,000,000" appears above the 1854 date, next to two bags of coins, which are inscribed with 35,000 and 30,000. Presumably, these are intentional references to some aspect of the Treasury or American trade—but what aspect? Are they connected to national debt or gross national product? We have yet to find a satisfactory answer, and if you can provide one we will be happy to receive it!* 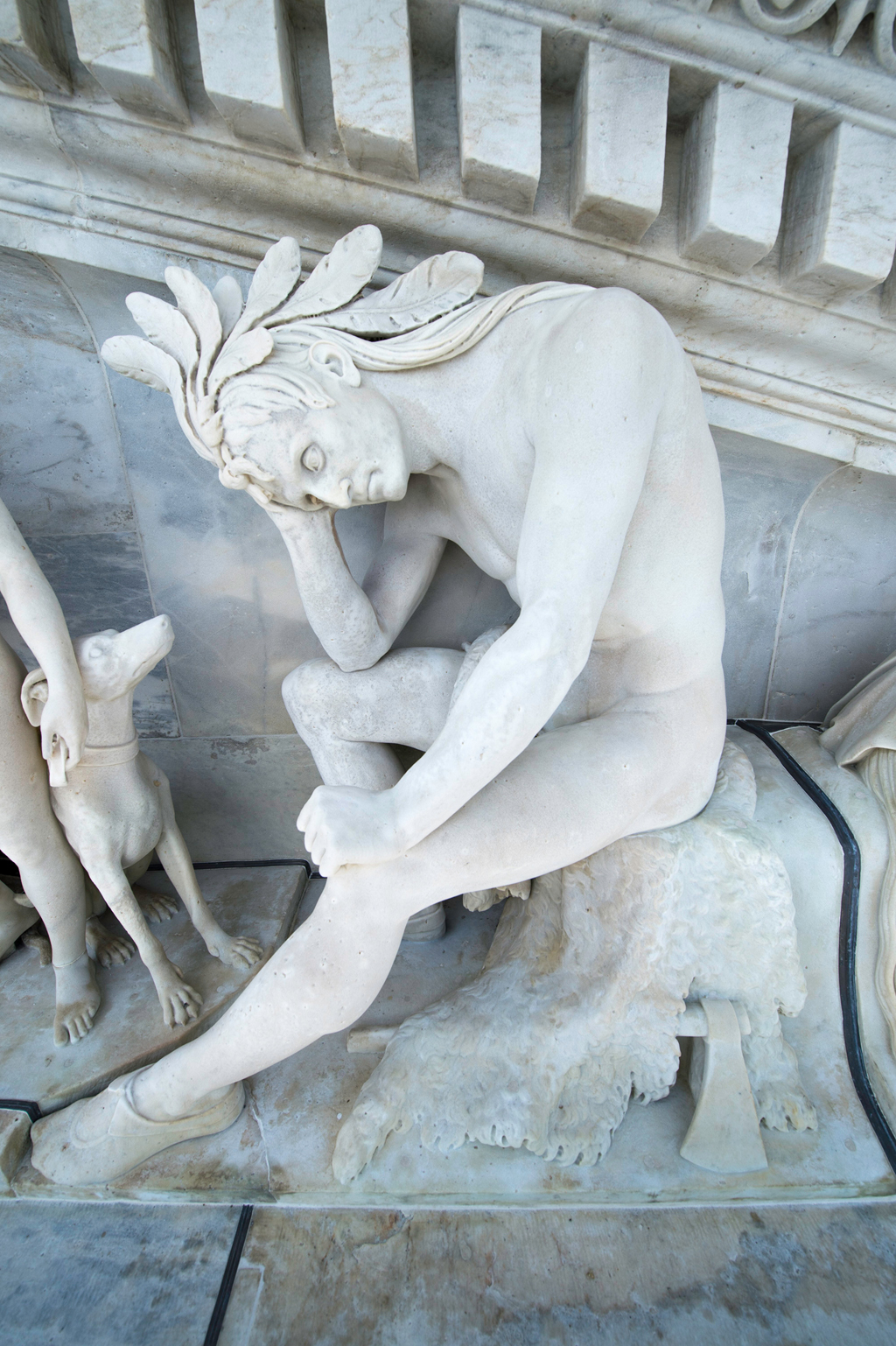 Close-up examination of the sculpture also shows how Crawford struggled with the figures of the Native American family and Revolutionary War soldier, never fully capturing convincing features of the non-European figures or minimizing the soldier's resemblance to George Washington, for which he was criticized. Still, he included poignant details, such as the hunter holding the lead of his dog, and the necklace of the Indian mother. Crawford consulted several books on American Indians but appears to have patterned the brooding Indian Chief on a painting by Charles Deas that was entitled An Indian Chief and exhibited in St. Louis in 1841 (now in a private collection).

When the present scaffolding is removed to reveal the restored stone of the Senate Extension, viewers on the ground will once again see Progress of Civilization as a harmoniously placed component of the Capitol's architecture. However, the close inspection that we have been able to conduct has made clear many details that connect the sculptural group to specific events and people familiar to Crawford, suggesting that the artist wanted not only to heighten the relevance of the pediment group for contemporary Americans but also to leave tantalizing clues for future generations to study and appreciate. The new investigation is under way, and we look forward to sharing the results.

Michele Cohen is Curator for the Architect of the Capitol.

---
Editor's Note:
Read the follow-up story on this mystery.

I'm speculating that the numbers on the block and the coin bags in the Capitol Extension Pediment were a praise to the Pierce Administration's success in negotiating the Canadian Reciprocity Treaty of 1854 (signed June 5). Reportedly, Mr. William L. Marcy ( Sec. of State) had bribed Halifax, Fredericton, and St. John's in order to facilitate passage; while Lord Elgin floated it through the U.S. Senate on an ocean of Champagne. I have no actual knowledge, but suggest that the coin bags represent the small relative price paid for the greater speculation of what the Treaty would have been sold as being worth to the USA at the time. - Joe

These close-up photos are beautiful and your descriptions made me want to see every detail. I would love to see this photo spread (and more) as a special exhibit in the visitors‚Äô center. Explanatory notes accompanying the exhibit would reveal the thinking of the time and help us understand how ideas change over a historical period.