The Cannon House Office Building is the oldest office building on the Capitol campus, dating back to 1908. Due to its advanced age, the Cannon Building is undergoing a top-to-bottom renewal. Below are frequently asked questions about the Cannon Renewal Project.

Why is this work necessary now?
This iconic facility, built in 1908, is the oldest congressional office building. The building structure and many of the building systems have not been modernized during the building’s existence. A critical stage has been reached in the life of the Cannon Building – the century-old building is plagued with serious safety, health, environmental and operational issues that are rapidly worsening. Without action, the essential systems housed behind the walls and in mechanical rooms will continue to crumble and fail, impacting members, staff and constituents. To address these urgent problems and to ensure the Cannon Building provides an effective congressional workplace into the next century, the Architect of the Capitol (AOC) is undertaking a complete renewal of the building.

What are the benefits of the project?
Over the last several years, the building has experienced plumbing leaks, plaster ceiling failures and chunks of decorative stone dislodging from the building exterior and falling to the ground. The project will improve the functionality of the building for both members and staff, making it far more efficient, comfortable and safer, while retaining the historic grandeur of the building. The renewal project will replace or repair key building systems such as heating, cooling, lighting, plumbing, fire and life safety, accessibility and structural integrity.

How long will it take?
The renewal project is scheduled to take approximately 10 years, broken into five distinct phases of work. The duration of each phase will align with the congressional move cycles. The first phase, Phase 0, began in early 2015 and focused on the entire basement level. It was completed in December 2016.

Phase 1 began in January 2017 and is scheduled to be complete in November 2018. The entire west side of the building, from the basement to the fifth floor, is closed. Work includes demolishing and rebuilding the fifth floor, conserving the exterior stonework and rehabilitating the individual office suites. 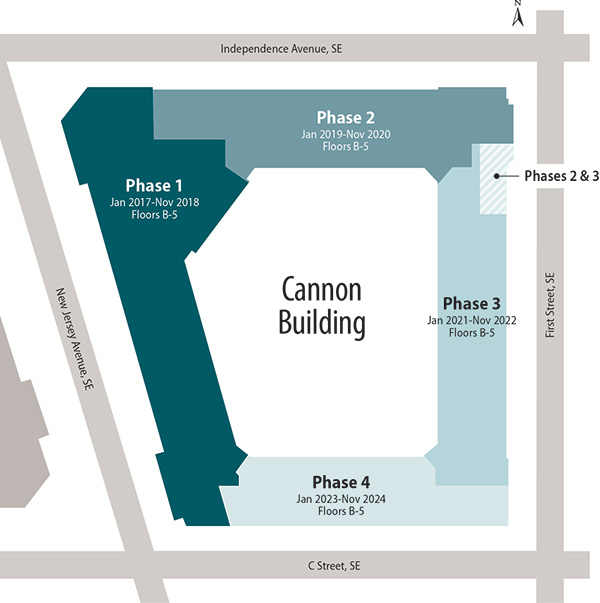 How will the work impact members of Congress and their staff?
Members located in the Cannon Building's Phase 1 construction zone were relocated in December 2016. All House members have a suite located in the Longworth, Rayburn or Cannon House Office Buildings. Construction crews created additional member suites in the Longworth and Rayburn Buildings and these suites were included in the November 2016 member office lottery. Some committee and support staff were relocated to the Ford House Office Building and the Thomas P. O'Neill, Jr. Federal Building (located next to the Ford Building). Each phase of the project will require the affected wing to be vacated.

When will this impact other offices?
During Phase 2, there will be work to prepare new member suites in the Longworth and Rayburn House office buildings. These future suites are located in spaces currently occupied by congressional and support staff. In support of the renewal, occupant relocations began in 2014 to the Ford Building, O'Neill Building and other House office buildings.

How does this impact the Member office lottery?
Additional member suites will be built out in the Longworth and Rayburn Buildings during Phase 2 and included in the existing election cycle lottery process. During each construction phase, offices in the section of the Cannon Building closed for renovation will be excluded from the lottery process. House leadership will make final space use decisions.

How can the Architect of the Capitol ensure the project delivers good value to the taxpayer?
The Architect of the Capitol is committed to maximizing taxpayer value, reducing the risk of cost overruns and delays and minimizing disruption to the work of Congress. AOC is working closely with the House to clearly define requirements to avoid future changes that may cause cost increases and delays. Additionally, AOC is partnering with the Government Accountability Office and General Services Administration to incorporate lessons learned from other similar, complex projects and to implement risk mitigation strategies. Similar projects have been conducted throughout the executive branch including the Eisenhower Executive Office Building and the headquarters of the Departments of Interior, Justice, Treasury and Commerce.

What is the budget for the renewal?
The renewal process is scheduled to take approximately 10 years, with each of the five phases (0-4) aligned to fall between congressional move cycles. The entire project budget is $752.7 million with allocations for planning, design, construction, management, furniture, information technology, security equipment and swing space build-out and moves.

Resources for House Staff
The pages below are restricted to the Capitol Network only.